James Rosenquist is an American painter who was one of the artists identified with pop art, and is still a working artist. If you suspected that he has a large and legendary body of work, you’d be absolutely correct.

They (art critics) called me a Pop artist because I used recognizable imagery. The critics like to group people together. I didn’t meet Andy Warhol until 1964. I did not really know Andy or Roy Lichtenstein that well. We all emerged separately.
– James Rosenquist

Trained as a billboard painter (back when such an occupation existed), Rosenquist applied his technique and sensibility to collage-like juxtapositions tending toward the enormous. Take the painting below, “I Love You with My Ford”, measuring 6 feet, 10 and 3/4 inches by 7 feet, 9 and a 1/2 inches. Rosenquist once mentioned that he uses images of canned spaghetti in his paintings a lot because he ate a lot of it early in his career. I wonder how often these kind of recurring images have such mundane reasons behind them in the work of famous artists… 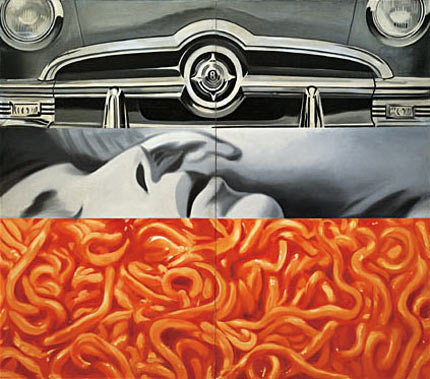 Rosenquist’s juxtapositions of images aren’t limited to simply plopping one image on another; he works with his source images to create quite complex compositions – take this portrait of Marilyn Monroe created shortly after her death; the image is cut, inverted, reversed, and has the Coca-Cola logotype running through it, nodding to Marilyn’s commodification and the commercialised  fracturing of her identity into prepackaged units. 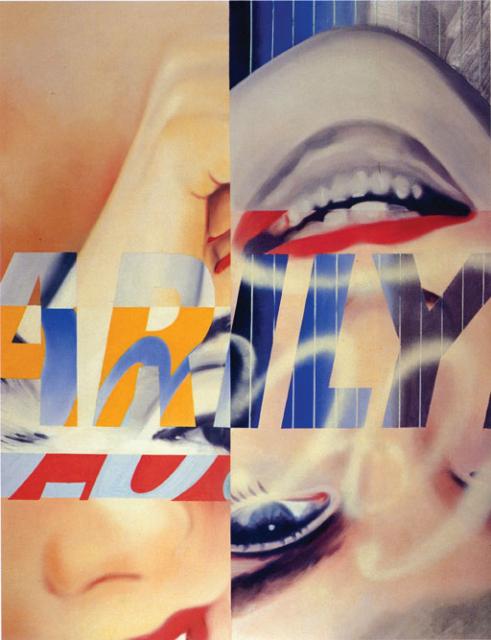 The main reason I decided to write about James Rosenquist today is that I stumbled across a truly excellent interactive section of the MoMA website:  JAMES ROSENQUIST: F-111 .

F-111 a really remarkable piece, essentially a multi-panel painting of an experimental aircraft. It is a condemnation of the military industrial complex at the height of the Vietnam war, that is no less relevant today than it was when he began painting this 85 foot long masterpiece in 1964. 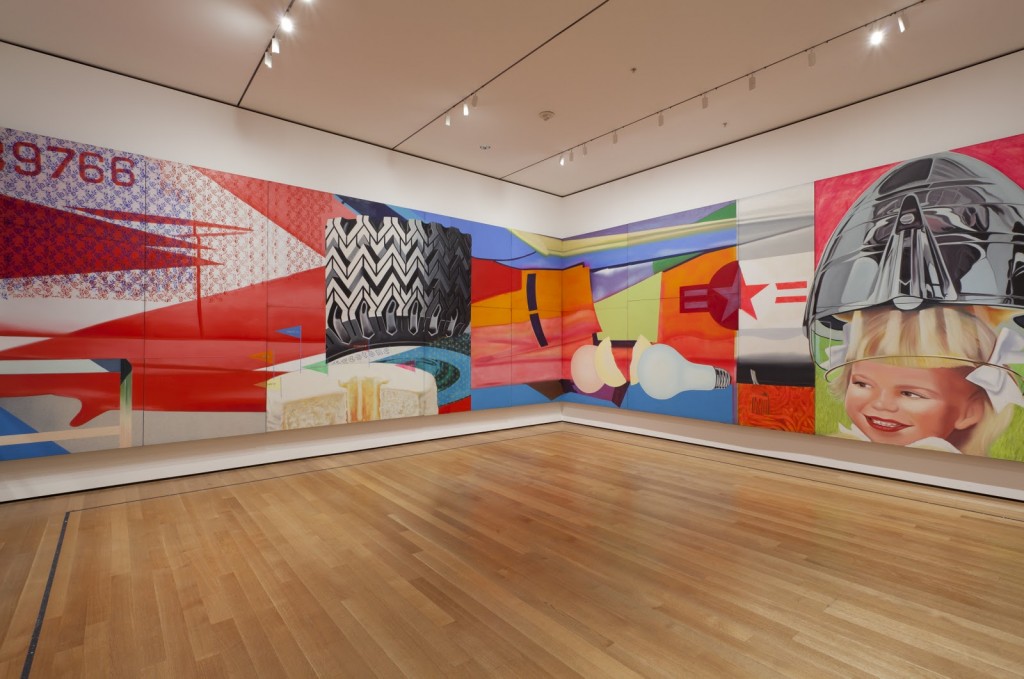 I remember thinking, How terrible that taxpayers’ money is being spent on this war weapon that is going to rain death down on some innocent population halfway around the world for some purpose we don’t even understand, while at the same time this warplane is providing a lucrative lifestyle for aircraft workers in Texas and on Long Island…I asked myself…Why is this new plane, the F-111, being built? For defense? Defense against what? When you think of the conflagrations and all the money spent on obsolete weapons that could have gone into health research, hospitals, and public works, it was such misguided thinking. So, one idea I wanted to include in this painting was about the lapse in ethical responsibility. We were paying income taxes for what seemed to be an already obsolete fighter plane, for a war machine that was this monstrous vacuum cleaner for taxes. Under the Johnson administration, we were being subjected to an even bigger vacuum cleaner: the Vietnam War.

The interactive website is quite ingenious in its use of interface to allow the user to explore the different elements of the painting, complete with explanations from the artist as to what he intended, and social media links so users can comment on individual sections, the work as a whole, engage in discussions on the site itself or link back to a variety of social media platforms. This really one of the best interactive sites for an art museum I have ever seen, and is an excellent way to get a better understanding of such a remarkable piece of art.

If you would like to learn more about this period of Rosenquist’s work, James Rosenquist: Pop Art, Politics, and History in the 1960s

by Michael Lobel is a great place to start.

“James Rosenquist: Pop Art, Politics, and History in the 1960s provides a new perspective on the work of Rosenquist, a key but neglected artist of the Pop Art movement. Michael Lobel, who bases his study on detailed contextual research as well as close visual analysis, highlights the themes of obsolescence, novelty, and ephemera in Rosenquist’s images and effectively relates the artist’s interests to broader questions of consumer culture and urban planning in 1960s New York. Clearly written and thoroughly engaging, this book makes a significant contribution to our understanding of the artist and of Pop Art.”
-Cécile Whiting, author of Pop L.A.

← The Mystery of the Colonel
Alexandra Levasseur →