March 23, 2013 · by Ian Rogers · in Calligraphy and Lettering, Drawing, My Sketchbook

Well, it’s been some time since I’ve posted. I’ve been super busy with home & work but that’s no excuse, right? Here’s a look at my sketchbook for now. 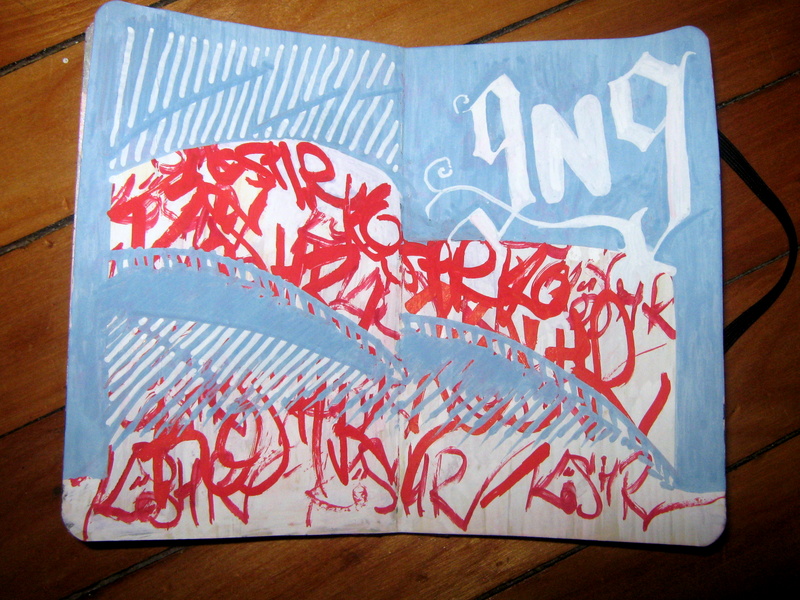 I read an interesting article (I forget the source, sorry – getting old I guess) about how handstyles are looked down on, as tags are mostly crap… At the same time they’re the entry point to graffiti for most people ) and they’re effectively the last remainder of calligraphy and actually doing lettering in any meaningful way. There’s some value to that.  Sure, many  are crap but it’s people starting out so that’s to be expected. Nobody likes to wake up to see their front door toy tagged but  whatever. I don’t hate tags but I do look at pieces as more impressive, but maybe that’s because my background is fine arts instead of graf. I don’t look down on graf  (at all) and actively love street art (I’m beginning to understand the reasons for the division between street art and graffiti even if I don’t think it’s that important) but the thought that tags are essentially calligraphy is a very charming one.

In any case this is me thinking about all that, playing with acrylic markers and my sketchbook. Make of it what you will. As always this is in my Moleskine… if you like to beat the heck out of your sketchbooks and are looking for a nice pocket-style book, you can always get a Moleskine  for yourself.

//edit – I found the article! It was on imprint, about Christian Acker.

“We tap keyboards far more frequently than we touch pen to paper,” designer and author Christian Acker says in his introduction to Flip the Script: A Guidebook for Aspiring Vandals and Typographers (Ginko Press, 2013). “Graffiti may well be the last great execution of highly practiced penmanship in popular culture.”

Flip the Script seeks to contextualize the tagging styles of American graffiti writers from different periods and regions in visual history. This is the first book of its kind, and it is vast in its scope. Flip the Script documents over 500 signatures, or “tags,” the calling card of the street writer. Acker systematically analyzes historic hand styles by collecting a remarkable body of work from the most influential US cities, and searching for the common threads that connect cultures.