Stephanie Buer is an artist living in Portland, Oregon. Her work consists of drawings and paintings of abandoned industrial spaces. Before I go into that more, some backstory:

Wandering through the wilds of the internet, I found a grainy black-and-white photograph of a car ramp in an abandoned parking garage. But wait…. not a photo, but a drawing. A very accurate, detailed charcoal drawing. For all its accuracy, though, what captivates me most about this piece is its sense of place, and the timelessness of abandoned spaces. Not timeless in the sense of being an old standby, or clichéd in any way, but being outside of time.

So yeah, timelessness. It’s kind of the same idea as the “pure objects” Yuki Saiga describes when talking about his photos of Gunkanjima:

Order and value that only prevailed through human existence had long been disrupted. Items were scattered here and there with no context, no ranking. Everything had equal value. The sight I saw spoke of the relationship of the master and servant that had vanished at the time these items were discarded, which liberated them from human reign. To be abandoned meant freedom from all. The items left behind on the island lost their names, their given tasks, even the meaning of their existence. The laid there as mere “objects”. Books and clocks and empty bottles were no longer books and clocks and empty bottles. Things that had been domesticated by humans no longer existed on the island.  Just as the inhabitants started their new lives by leaving the island, these things too, left behind on the island, shed their identity once forced on by humans, to start their lives as “pure objects”.

All this to say that there is a quiet poetry to be found in abandoned spaces. Enough with backstory, back to Stephanie Buer:

Stephanie Buer began pursing a career in art at the College for Creative Studies in Detroit, Michigan where she fell in love with the city and urban exploration. She spent the next ten years living in Detroit and developing as an artist.
– Juxtapoz Magazine  Back Talk: A Conversation with Stephanie Buer April 23, 2012

Buer’s appreciation for these spaces shines through in her work. Although they are firmly within the traditions of representational realism, her drawings and paintings don’t lack in emotive qualities. The interplay of light and texture in her work lends an almost post- romantic quality in the art history sense to the rigidity of industrial architecture. As these urban landscapes are quietly disassembled by plant life and exposure to the elements, you could read it as Buer’s postmodern riff on Victorian paintings of overgrown ruins. 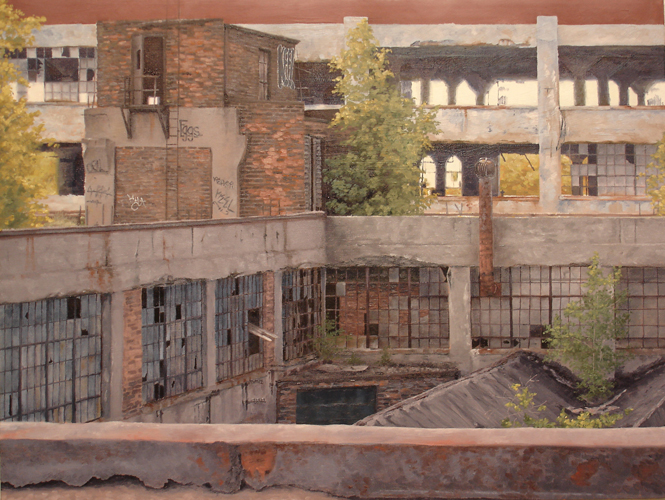 Buer recognizes these art historical influences (as a realist painter-in-oils it’s kind of inescapable) but also acknowledges the contemporary aspect of her subject matter and the influences those bring to her.

I love the way that Manet and Sargent use oil paint, every time I see one of their pieces in real life I can’t pull myself away.  I also really love the work of Franz Kline, Kevin Cyr, Josh Keyes and any and all street art; Kid Acne is one of my favorites right now.
– Juxtapoz Magazine  Back Talk: A Conversation with Stephanie Buer April 23, 2012

I’ve written about Kevin Cyr‘s sculptures and modifed prints of NYC delivery vans and I can see the commonality – I’m also reminded of the graffiti-rich urban landscapes of Jessica Hess or the abandoned industrial building paintings of Morgan Craig. I think Buer’s paintings have a unique quality, though, in how she handles paint. When she references Manet and Sargent it’s easy to see the influence – I was reminded of Waterhouse, too, and the skies and light in Turner‘s late works. 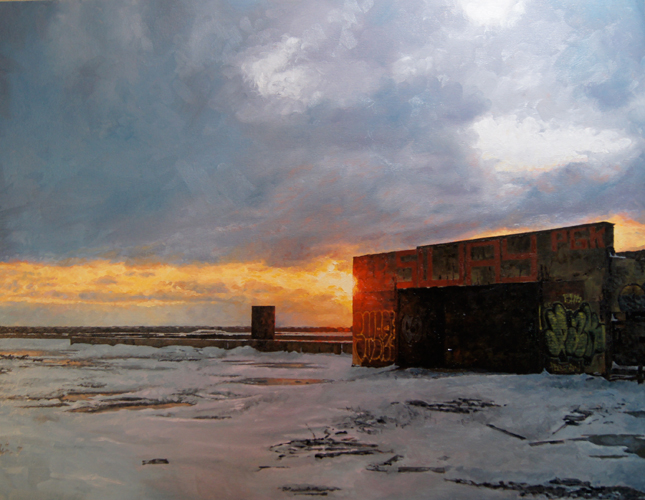 Sunrise from the Roof of the Packard Pant (2011)

There’s a meticulousness to realist representationalism that sometimes ends up being too much about the accurate details and carefully rendered surfaces to the detriment of mood. This is where Buer’s nod to art history pays off ; her work evokes mood – in spades.

While Buer’s paintings are breathtaking, her drawings are equally worthy of notice. Despite the stark rigidity of industrial architecture,  they  have a lushness to them.  Her drawings are not only an accurate representation of an abandoned space, but of the meditative stillness, and the timelessnes I mentioned earlier. I can almost smell the rotting concrete and hear the water dripping when I look at them. 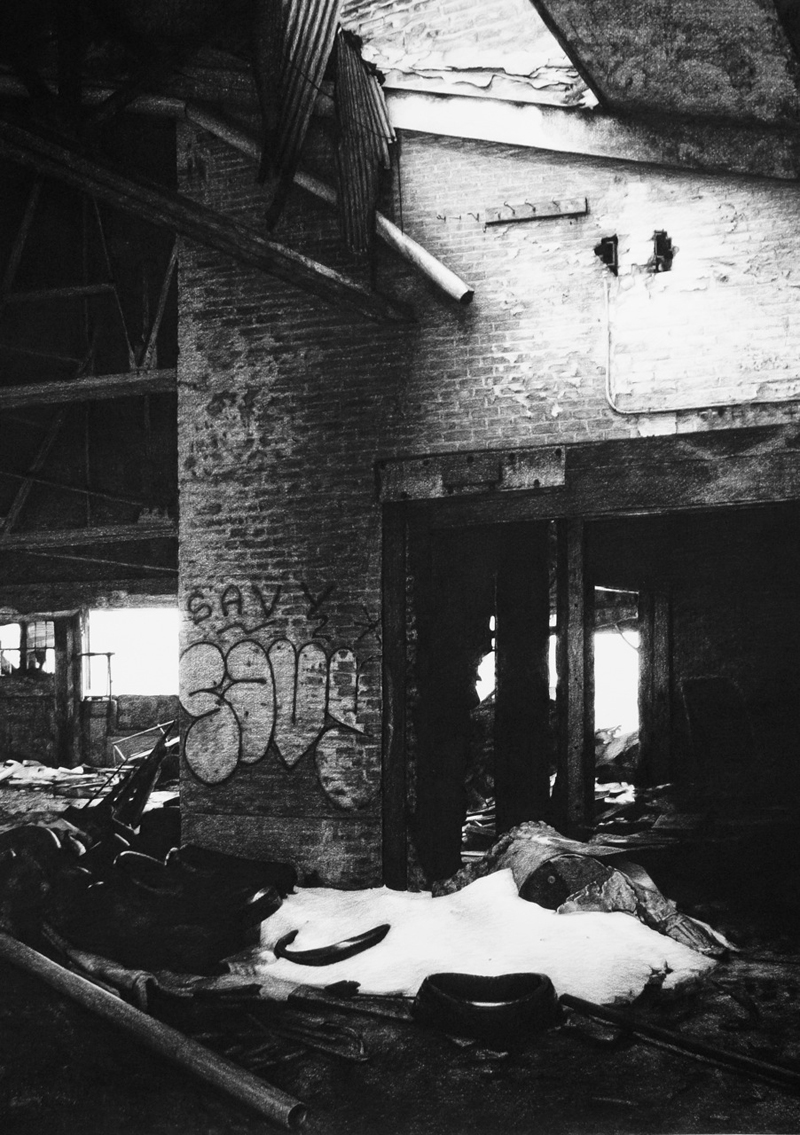 Her urban landscapes explore the many layers of history found in the marginal areas of cities. From the imprints of industry and production to its eventual decay, each subject has a historical context, an original purpose that is now lost. She is fascinated by how these places change as they succumb to the manipulation of vandals, artists and the resilience of nature ever slowly growing alongside. Through her art Stephanie seeks to find beauty and peace in these forgotten and unloved areas of cities.
– stephaniebuer.com

More of Buer’s work can be seen on her portfolio website. She also has a charming Tumblr blog where you can see her work in progress, keep up with show dates, and more.