The art world is a pretty exciting place but it’s not too often you hear about an artist having to flee for his life with the Zimbabwean army on his heels. I wrote about Petro Wodkins before, but to quickly recap he’s an installation artist/ prankster who likes to shake things up.

Here’s the email I got from his assistant, Tala:

Last week the Russian artist Petro Wodkins barely made it alive out of Zimbabwe after a daring art stunt.

Wodkins, who previously has been behind a series of art happenings covered by global media, well you know about it – you’ve written about him, had been invited to a workshop in Zimbabwe, but instead choose to put up a HUGE golden statue of himself singing a weird song mocking Mr Mugabe. The government reacted with brute force, pulling down the statue, both police and army was involved in trying to arrest Petro who managed, by using different cars, evade the pursuers and escape to Zambia.

Since filming in Harare is forbidden everything had to be filmed with hidden cameras.
Today Petro is releasing the song and this filmed material for the first time!

You can see the whole story HERE!

Petro are quite upset and buisy planning for next strikes right now, but he likes you and asked me to get in touch to offer you one of very few interviews about this.

You just can’t make this stuff up. As Wodkins said, “If art can make people dance, sing and laugh in the face of a dictator this is reason enough for me to keep doing art, this and the face of a furious dictator”. Um… OK. More power to you, Petro Wodkins. I salute you! 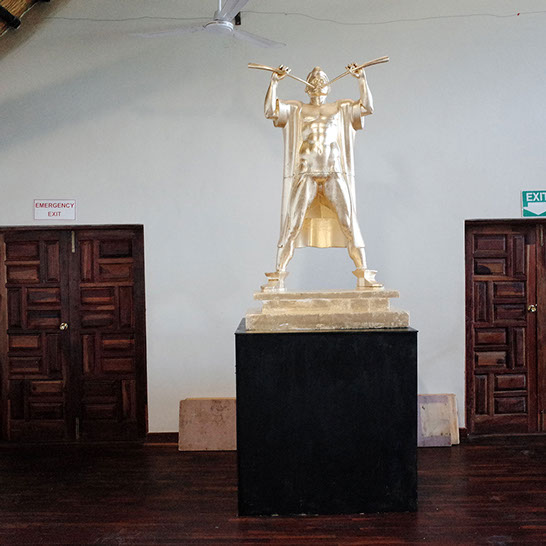 Petro Wodkins – My Gift to Mugabe