Chuck Close is a pretty interesting painter, insofar as most of his career has been about not being a painter in the traditional sense. When he was doing his MFA at Yale he was known for his excellent brushwork, so around 1967 he simply gave up using a paintbrush in the traditional way.

“I chose to do things I had no facility with. The choice not to do something is in a funny way more positive than the choice to do something. If you impose a limit to not do something you’ve done before, it will push you to where you’ve never gone before.”

Mostly known as a photorealist, Close is an anomaly in that he does large-scale (REALLY large-scale) representational realist portraits, but employing image reproduction techniques he replicates by hand such as 4-colour process, halftone, or pixellation. He has worked with many diverse media from irregular bits of coloured paper to his own fingerprints. The approach I personally like best is the one shown here in “Francesco I”, a portrait of fellow artist Francesco Clemente (and, as it happens, an artist whose work I like a lot, too). 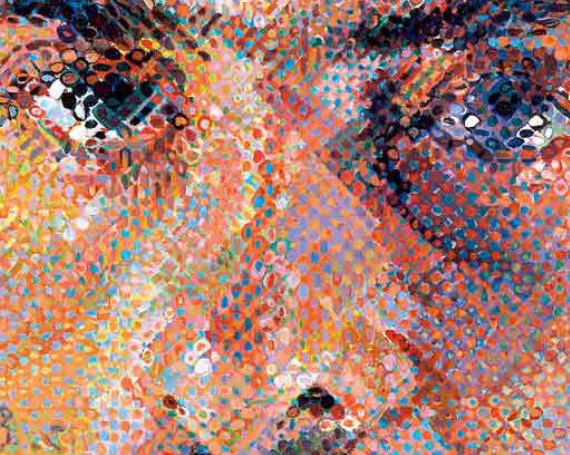 You can see the approach he’s using here – highly contrasting colours in small concentric blobs that as you move further away give the impression of more even colour: 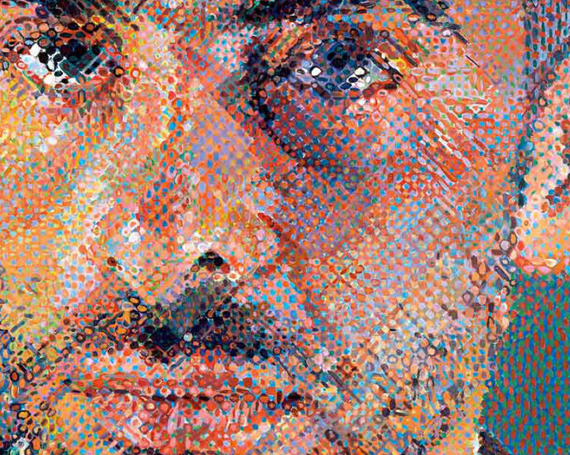 An interesting fact: Chuck Close has Prosopagnosia (face blindness). He says that working on portraits helps him remember faces better. 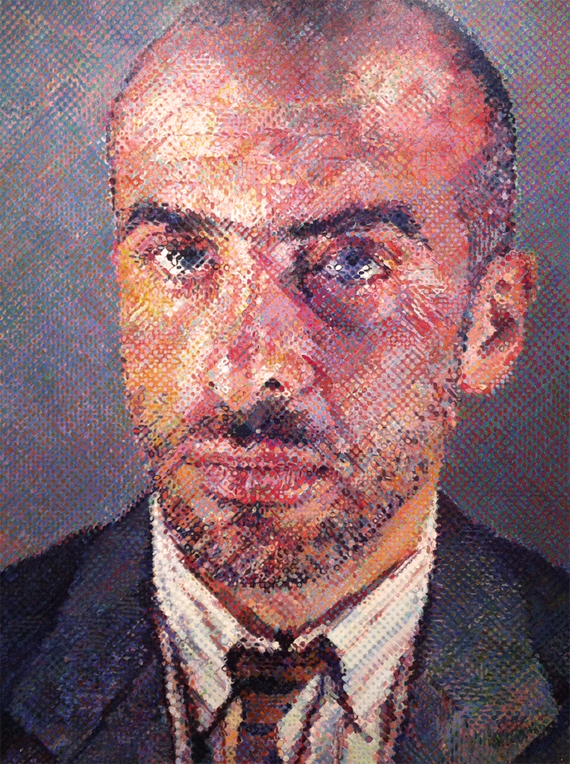 Although his later paintings differ in method from his earlier canvases, the preliminary process remains the same. To create his grid work copies of photos, Close puts a grid on the photo and on the canvas and copies cell by cell. Typically, each square within the grid is filled with roughly executed regions of color (usually consisting of painted rings on a contrasting background) which give the cell a perceived ‘average’ hue which makes sense from a distance.

… His first picture with this method was Big Self Portrait, a black and white enlargement of his face to a 107.5 in by 83.5 in (2.73 m by 2.12 m) canvas, made in over four months in 1968, and acquired by the Walker Art Center in 1969. He made seven more black and white portraits during this period. He has been quoted as saying that he used such diluted paint in the airbrush that all eight of the paintings were made with a single tube of mars black acrylic.

Later work has branched into non-rectangular grids, topographic map style regions of similar colors, CMYK color grid work, and using larger grids to make the cell by cell nature of his work obvious even in small reproductions. The Big Self Portrait is so finely done that even a full page reproduction in an art book is still indistinguishable from a regular photograph. 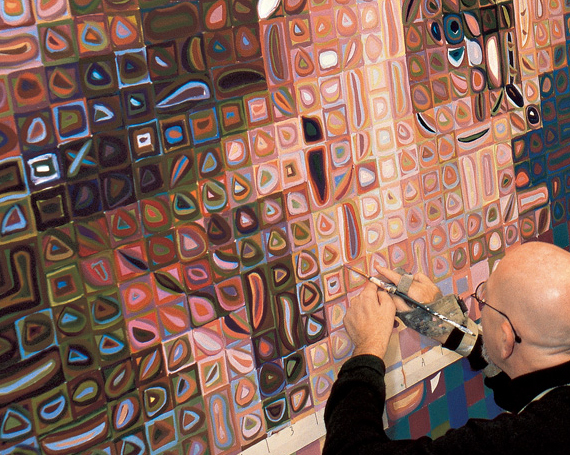 Anyhow, Chuck Close is a pretty neato artist and has been super-influential. I highly recommend that you find out more about him if you’re notfamiliar with his work – a good place to start is the wikipedia article on him, or his website.