Nude Painting of Canada’s PM has Some Folks in a Tizzy: update

Back in May I mentioned that there was a kerfuffle over a nude painting of Canada’s Prime Minister being removed from public view, with the artist, Margaret Sutherland, crying censorship.

There’s been some buzz in the air as of late up here in Soviet Canuckistan; it seems that nudity is still “a thing”. Granted, it’s a nude painting of the Prime Minister riffing off the whole “Emperor has no clothes” thing in a reclining pose invoking classical nude studies… but it’s rather quaint that people would bother to get worked up about it in this day and age to the extent that our national broadcaster, the CBC, bothers to repeat the story. Granted there appears to be more titillation than shock. The only person really upset seems to be the artist, all steamed up about censorship – apparently her work is on display at a local library and they take it down or cover it up when the space it is displayed in is used for children’s activities. The horror.

Well, apparently it’ s not just the artist. I stand corrected.
Some buffoon from halfway across the country (Alberta, as it happens)  took it upon himself to file a complaint with the Ontario Human Rights Commission alleging that this painting constitutes sexual harassment of children. Fortunately, the tribunal dismissed the claim out of hand. Please, won’t someone think of the children. 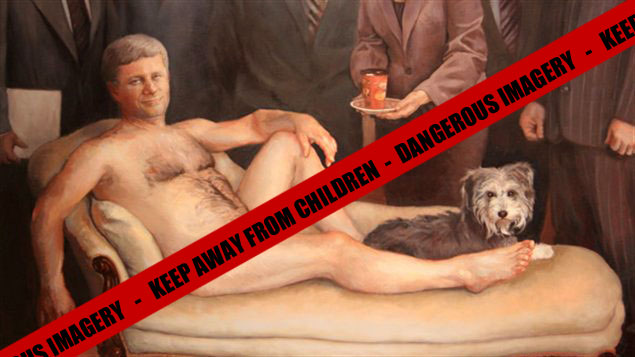 Sutherland laughed at the suggestion that exhibiting the painting would constitute sexual harassment.

“I suppose we could sue every male artist that ever painted a portrait of a female nude,” she said.

Indeed. What’s even more comical is that it made national news. It’s kind of endearing that this kind of thing can still raise eyebrows in our quaint nation.