My regular readers have seen me wax poetic about the Kentucky Fried Chicken logo in the past. Heck, I’ve even made art about this obsession. Today, I’m going to wax poetic on how they conquered the world. Kentucky Fried Chicken’s slogan is “We Do Chicken Right,” but what really makes the chain successful is how well it has adapted to local cultures and has become an international phenomenon by doing so. KFC is imbued with a strong mythos, personified by Colonel Harlan Sanders, the white-suited southern gentleman whose face is known around the world. To truly appreciate the historical context of KFC’s internationalization though, we need to look back to the time that Colonel Sanders split from KFC USA.

Scott’s was part of the Scott’s Hospitality empire … which opened its first Scott’s Chicken Villa under the Kentucky Fried Chicken banner in 1962 …  catering the original recipe flavour that many Canadians still fondly recall. Amazing to think that even as far back as 30 years ago, disgruntled Kentucky Fried Chicken fans from the United States would cross the border just to re-live the “finger lickin'” glory they had grown up with. 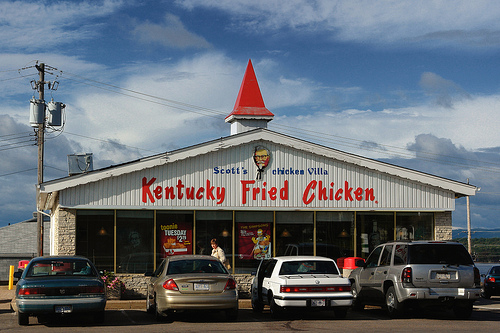 These are the Kentucky Fried Chicken restaurants I grew up with. Pressure-cooked chicken (not double fried) and the less greasy batter that predated the “crispy” version. Perfection, really.

Interestingly, there’s currently a kerfuffle in Québec about many international companies not having any French on their store signs, and the Office québecois de la langue française (OQLF) is getting involved:

The OQLF wants businesses to add French generics to their trademark, something many other retailers have done in recent years after solid crackdowns by French-language authorities.

French generics can be terms to help describe the service or product sold by the retailer or descriptive terms added under a trademark name. For example, the Second Cup coffee chain recently added “les cafés” before its name in order to comply with language laws.

Kentucky Fried Chicken never had this problem, as they voluntarily changed their store signage decades ago. It’s a small gesture, but shows the adaptability of the KFC approach to franchising within the context of the larger cultural milieu. 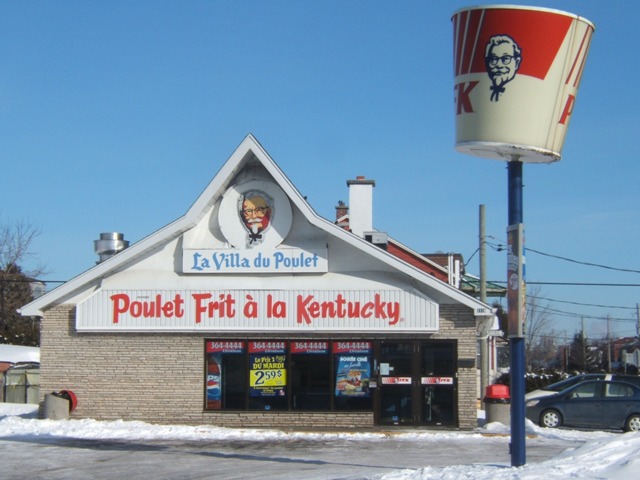 PFK in Lachine, a borough of Montreal, Quebec (photo via citynoise.org)

An even better example of this localisation is Kentucky Fried Chicken in Japan.

Many international fast-food businesses tried to penetrate the Japanese market with little success, other than McDonald’s and Kentucky Fried Chicken. Although its first market test at the Osaka World Expo in 1970 met with good results, KFC and its Japanese partner Mitsubishi could not make KFCJ profitable until 1976. The initial problems they met mostly revolved around location and meal portions – the first stores were located in suburbs with drive-throughs like North American stores, but most Japanese did not drive and the drive-through (or drive thru if you prefer) did not catch on. Also, the combo meal portions were much larger than Japanese consumers normally consumed, making the menu prices higher than most people were willing to pay for fast food. McDonald’s had locations in high-density urban shopping centres, and focused on individual items instead of combo meals – KFCJ followed that lead to great success. Another very important element of KFCJ success was in support form the Japanese government insofar as Mitsubishi was the backer, and Mitsubishi just happened to have an extensive poultry farming and processing operation. Since the 1980s KFC Japan’s business structure has evolved (it’s even been listed on the Tokyo Stock Exchange since 1990) but the initial success was to a very large extent rooted in KFC partnering with an established and well-connected local business.

More interesting, though, is how the Japanese have taken to Kentucky Fried Chicken. For instance, it is traditional to eat KFC for Christmas. Most KFC in Japan is dark meat, as the Japanese do not eat much white meat, toriwasa and torisasha excepted. Most fascinating is the statue of Colonel Sanders in front of each KFCJ. Traditionally the Japanese revere their ancestors, so the sight of an elderly man is a reassuring sign of quality and trustworthiness. Did I mention they also dress up the statues for holidays and promotions? 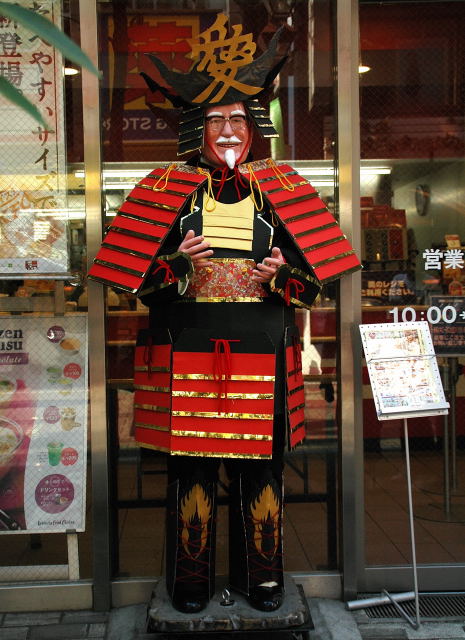 Dressed up for Boy’s Day 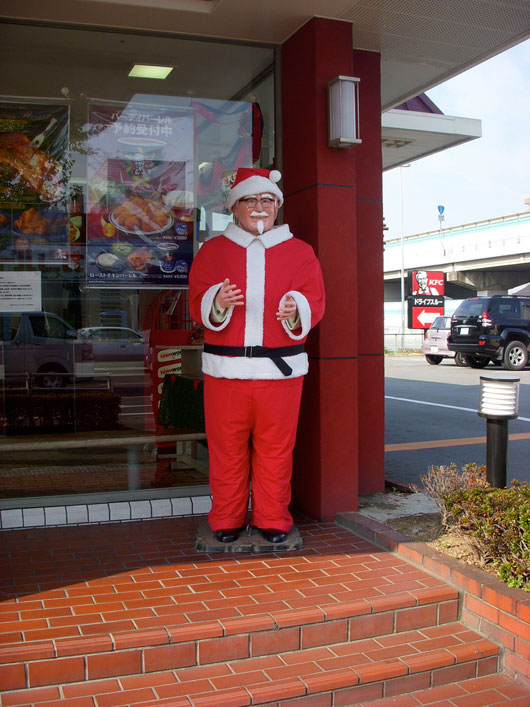 Dressed up for Christmas 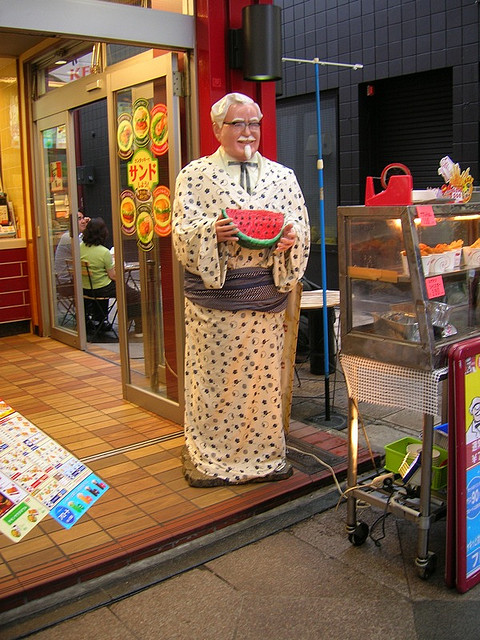 dressed up for Gion Matsuri

There is also a well-known curse involving the Osaka baseball team, The Hanshin Tigers and a Statue of Colonel Sanders.

In 1985, the Tigers won the Japanese World Series for the first, and only time. Their star foreign player, Randy Bass, won the triple-crown and MVP and became a legend.

After the victory, Hanshin fans took to the streets of Osaka, hijacking trains, and jumping in the dirty Osaka river. While jumping in, they began yelling the names of Tigers players they thought they resembled.

Well, Randy Bass is a white guy with a beard and none of the Japanese fans looked even remotely like him. So, someone decided to go to KFC, grab the local Col. Sanders statue and throw it in the river. While they threw him over the edge of the bridge, the fans screamed, “RANDYYYYYY BAAASUUU!!!”

– Curse of the Colonel (mosh.com) 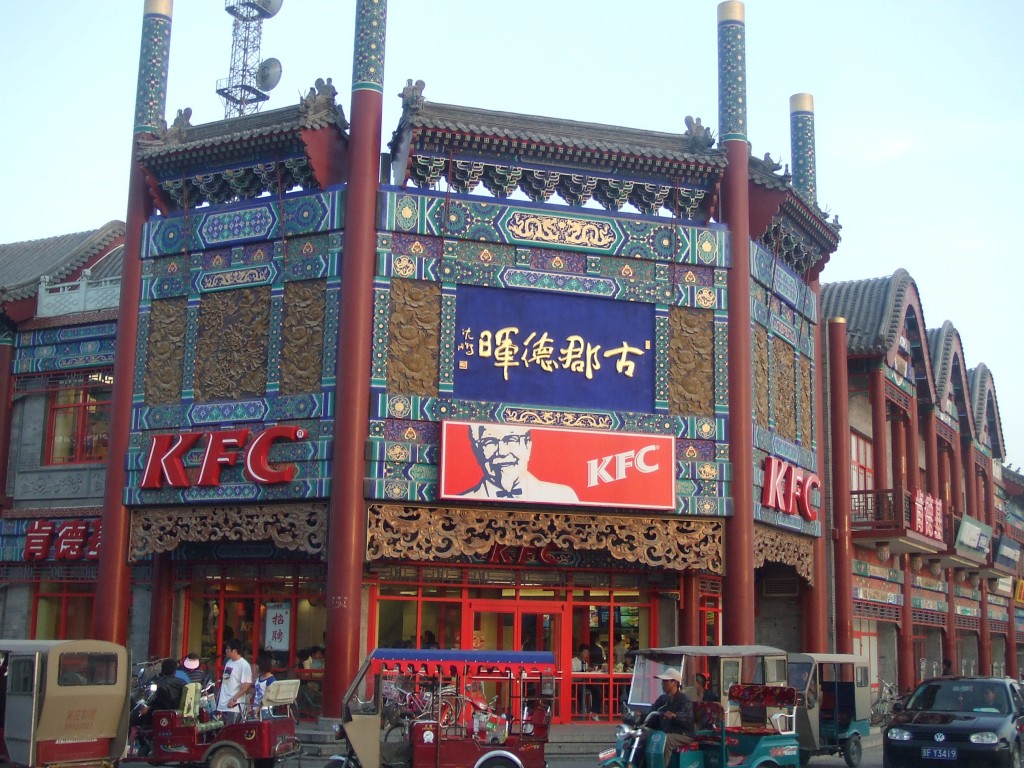