Andy Warhol is still one of the biggest celebrity names in the world of art. His work commands some of the highest prices ever paid, such as “Eight Elvises” (1963) which sold for $100 million in 2008.  He has vast legions of fans spanning decades and generations,  and there are still major museum exhibitions of and about his work every year, such as the exhibition that ran from September through December last year at the Metropolitan Museum of Art in NYC, Regarding Warhol. Even with such fame, many people don’t know about Warhol’s background as a fashion illustrator. 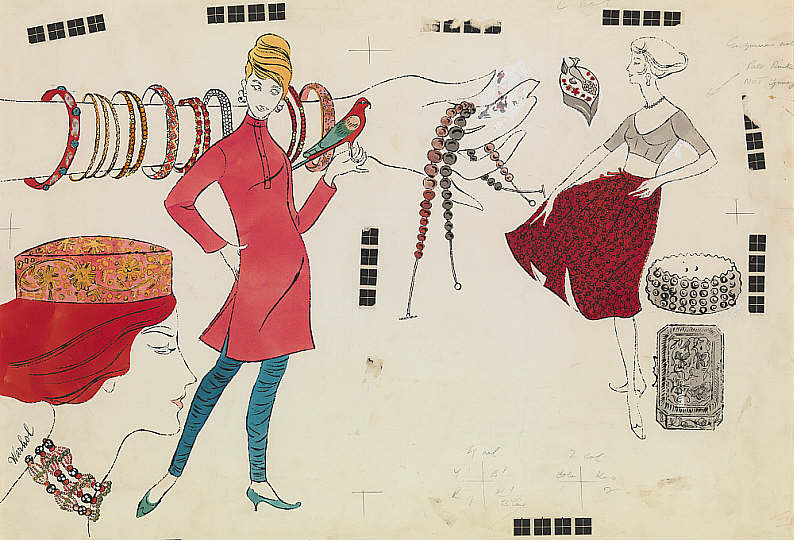 One of Andy Warhol’s first free-lance jobs was at Glamour magazine. He went on to become an extremely successful commercial artist, working for most of the major fashion magazines throughout the fifties, doing album covers for Columbia records, designing Christmas cards, book jackets and retail ad campaigns, including the famous shoe ads for I. Miller in the mid-fifties.
–warholstars.org

Pretty impressive roster of clients, right? Warhol was making some serious coin before he gave up commercial work and became a fine artist.

At the height of his career as a commercial artist, Warhol was earning one hundred thousand dollars a year, a staggering sum for the fifties… on the I. Miller account alone he made fifty thousand dollars one year…Eventually he had to hire assistants to help him keep up with his assignments. He even enlisted the services of his mother, who followed him from Pittsburgh to New York soon after he started making enough money to support them both.
– Paul Alexander, Death and Disaster: The Rise of the Warhol Empire and the Race for Andy’s Millions

The interesting part about his background in fashion is that Warhol kept working in fashion and commercial illustration now and then even after he became a successful artist. I was reading Dangerous Minds and found a great post about Warhol’s work for TV Guide in 1966. If you remember the TV show Get Smart, secret agent Maxwell Smart’s sidekick was the vivacious and brilliant Agent 99, played by Barbara Feldon. Well, implausible as it sounds, Warhol did some fashion spreads for TV Guide featuring Barbara Feldon and they’re actually pretty awesome.

Although I first read about this work on Dangerous Minds, all the images from TV Guide except the cover come from Assembly Plant Marietta.