A 1992 photomontage by Canadian photographer Jeff Wall, Dead Troops Talk (A Vision after an Ambush of a Red Army Patrol, near Moqor, Afghanistan, Winter 1986), has fetched more than $3.6 million at auction. Golly. 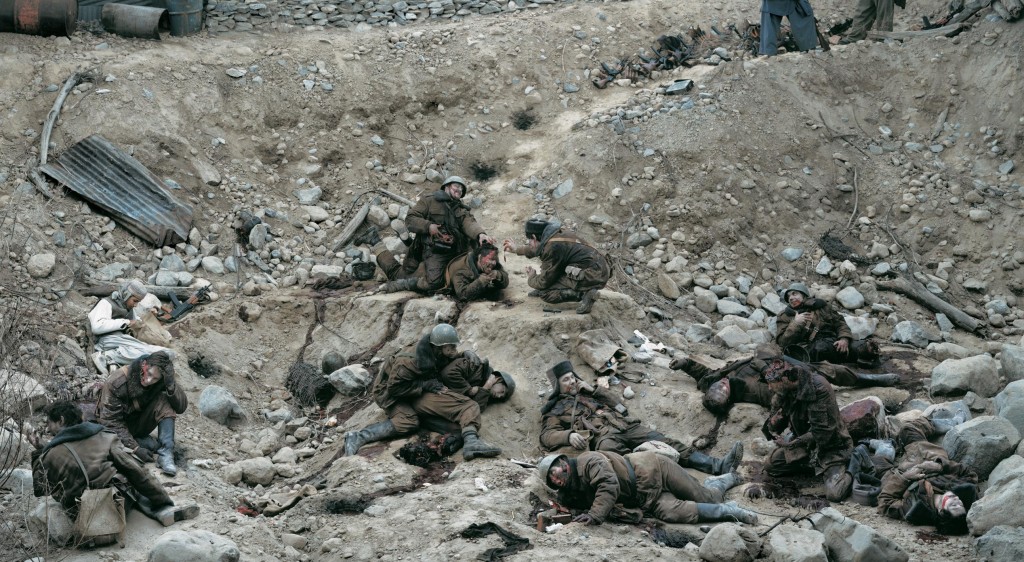 “A gruesome, large-scale battlefield picture of conversing corpses by acclaimed Canadian photographer Jeff Wall has smashed the artist’s all-time price record and become the single most valuable photographic artwork ever produced in this country.

The 1992 photograph titled Dead Troops Talk, in which Wall set up a macabre scene showing a group of Soviet soldiers talking to each other after being killed in the Soviet-Afghan war in 1986, sold Tuesday for more than $3.6 million at a Christie’s auction in New York.”

– Read the full article from the Vancouver Sun

I’ve had the good fortune to see this work on display and it really is quite moving and an impressive piece of work, and also a serious bit of craftsmanship given Wall’s complicated photomontage approach.

Here’s what Wall has to say about this piece:

The Afghan War was current when I began thinking about the subject, sometime in the 80s, I don’t remember exactly when. Then, as the war wound down and the Soviets withdrew, it all seemed to get forgotten. The collapse of the USSR overshadowed the Afghan conflict and Afghanistan disappeared from the world’s attention until the Taliban and so on in 2001.

The sense that the war was forgotten attracted me, and gave me a concrete basis to develop the picture. I liked the idea that, when the picture was finished (which would be in 1991 or 92), the Afghan war would be the furthest thing from ‘news’. So I could play with elements of journalism and history quite freely…

– interview with Gordon MacDonald in Photoworks no.5

Photography has been making some pretty big sales at auction lately, like Cindy Sherman’s Untitled #96 (Film Still) selling for $2.8 million or of course Andreas Gursky’s Rhein II breaking all records for price fetched at auction by a photo with $4.3 million … Worth noting, Gursky cites Wall as a major influence.

, which presents an excellent overview of Wall’s ouevre including “Dead Troops Talk” and provides a great deal of insight into his process and thinking behind his works.