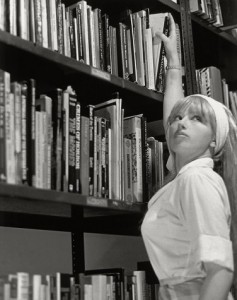 Cindy Sherman is probably the most popular living American photographer. Sherman is best known for  her staged self-portraits, particularly the “Untitled Film Stills” series, officially 1977-1980 but some work from the series is dated 1975-1981. In these staged self-portraits, Sherman changes her appearance and poses herself in a variety of scenes, evoking a wide variety of stereotypes that make you wonder – which is the “real” subject, or is it all an implied narrative built on conventions of feminine context?

Through a number of different series of works, Sherman has sought to raise challenging and important questions about the role and representation of women in society, the media and the nature of the creation of art.
– Wikipedia

Sherman’s early work in this vein is very popular – Untitled Film Still #96, for instance, was the image used as the poster for the travelling Cindy Sherman retrospective (1999-2000). It  recently sold at auction for $2.8 million – more than the entire revenue of its former owner, the Akron Art Museum from all other sources the year previous. Purportedly they will use this money to add newer work by Sherman to the collection. 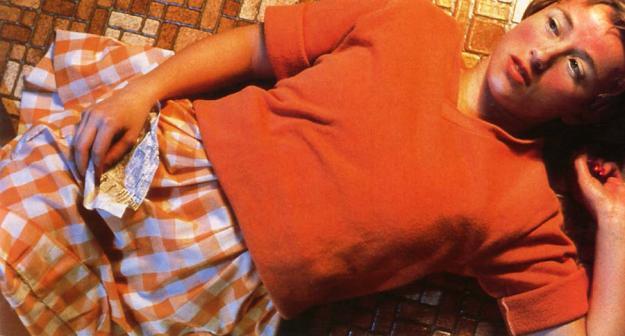 This raises the question – why is it that Cindy Sherman’s later work does not command the same prices? Cat Weaver (some images in the linked article NSFW) suggests that the reason is, to paraphrase, that Sherman’s early work is pretty pictures of a pretty lady, her later pictures are ugly pictures of an ugly lady.

It is crucial for anyone who talks about Sherman to say that her career has been an exploration of roles and role-playing — gender roles, most centrally, but also social and even existential roles.

Yes, I said existential, but you can just say that her dark period is underrepresented at the MoMA because it’s about aging and bodies and death. You can also note that the horrid, shallow collectors won’t buy those images and that the benighted MoMA went wrong in reflecting that capital-driven sentiment.

BTW, you’re not going to spoil the fun by pointing out that it’s easy as shit to get prosthetic limbs to resonate. Put ‘em anywhere and they scream love and death. Just try it. Pull off a doll leg and stick it in a tree. Sammy Beckett roll over! A few entrails and a plastic vajayjay and we’re knee deep in the absurdity of the human condition.
How to Talk About Art: Cindy Sherman Edition (some images in the linked article are NSFW) 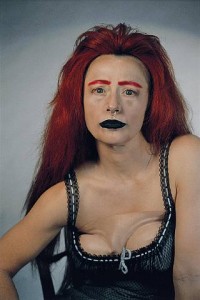 The art world likes to pretend that Sherman’s earlier “Untitled Film Still” series is celebrated as a critique on the objectification of women, but it can’t be ignored that these are also well-composed photos of an attractive young woman dressing up in costumes. Pretty easy on the eyes, compared to her later work which plays with darker images, including prosthetics, images of death, clown makeup, false noses, and yes, plastic vajayjays.

Now, I don’t think that art has to be unattractive or inaccessible. I’ve never believed that art must be challenging, or that if art is “too easy” to enjoy it has less value. Still, while I’m not as dismissive of Sherman’s work as Weaver is, I do think she has some good points. Maybe some of the appeal of Sherman’s early work is that museums and collectors can go support socially conscious art while maintaining the eye candy quotient. It’s certainly food for thought.

← From Whence the Ped? The Iconography of Otl Aicher
Nude Painting of Canada’s PM has Some Folks in a Tizzy →