Checking out one of my favourite blogs, but does it float, I came across the work of a collage artist with whom I was entirely unfamiliar – the Czech artist, Jiří Kolář(1914-2002). This is really incredibly exciting for me, not only because it’s always exciting to find a new artist to enjoy, but because a lot of the approaches he employs in his collage are very similar to the obsessive deconstructivist collage experiments I engaged in when I was in art school. In all honesty I thought I invented these techniques (typical of the kind of naive cockiness an artist in their mid-20s has in spades) but no, it was Kolář who invented these approaches some 30 years before me. 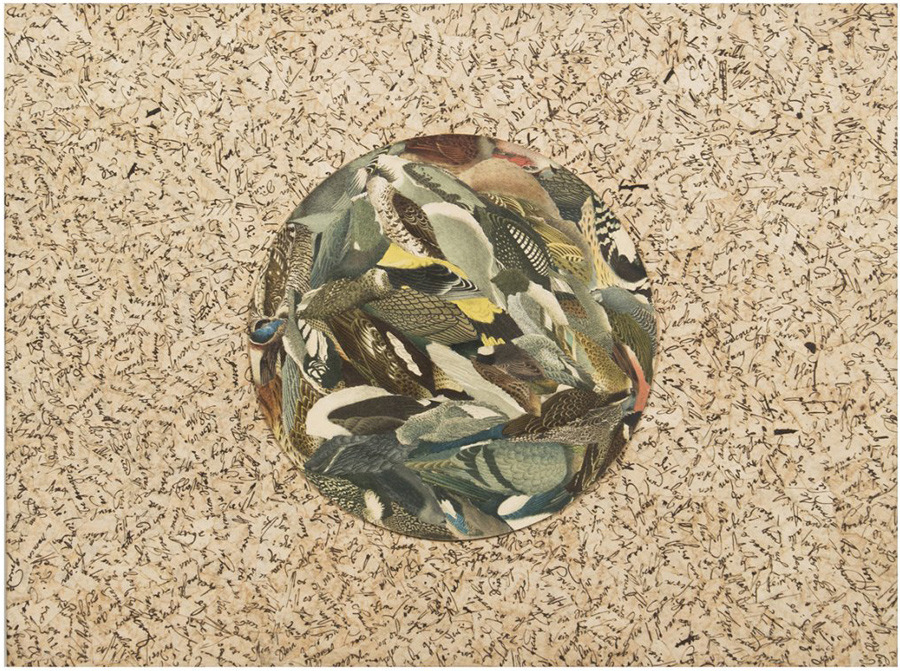 His first exhibitions in 1937 focused on his collages. In the 1960’s Kolář first combined painting and poetry but gradually turned completely to experiments in visual art. In his work he used a scalpel to cut pictures out of magazines. He produced colors in his collages by gluing on printed papers. His collages were intended to influence the viewer’s outlook on life; to raise the viewer’s level of consciousness. He invented or helped to develop new techniques of collage – confrontage, froissage, rollage etc.
– Wikipedia

For an explanation of confrontage, froissage, and rollage, check out this excellent article on collage terminology. So many options. Interestingly, Kolář is best known in his homeland not for visual art, but as a writer.

His poetry had an immediate impact on the literary underground of the late 1940s and 50s, and saw numerous samizdat editions in the 1970s and 80s. But though his greatest impact on Czech culture came from his verse and documentary prose poems, he is known abroad for his collages, crumplages and button-up collages, which open up to reveal a second layer.

Kolar never learned to draw or paint, and always claimed that his training as a carpenter enabled him to cut the straight lines he needed for his collages, or “picture-poems”, as in his 1969 montage Birds For Hans Sachs. His first exhibition abroad was in London in 1963, and a retrospective was mounted at the Guggenheim in New York in 1975; he also held exhibitions in Canada, south America and Japan, quite apart from Prague. His collages manifest both ironic wit (for example, his one-eyed self portrait of 1980), but also his horror at cultural and political disintegration – the best-known examples being his scenes of a distorted Prague.
– excerpt from the Guardian UK obituary

Collage with an ermine

But yeah, Jiří Kolář. Wow. As Max Ernst famously stated, “Collage is the noble conquest of the irrational, the coupling of two realities, irreconcilable in appearance, upon a plane which apparently does not suit them.”  Kolář’s work definitely fits this bill, and in some senses maybe even more than Ernst’s work, I think. While I truly adore Ernst’s approach to collage, Kolář’s approaches of superimposing images over one another using grids, using the forms of collage elements as windows into other elements, or simply placing elements discretely side-by-side forcing an implied narrative are all approaches that are near and dear to my heart.

True to his writer’s mission, Kolář compiled a Dictionary of Methods, published in Paris in 1986, in which he articulates all the other techniques of his invention such as ventillage, crumplage, kinetic collage, and which underline further still his affinity to conceptual classification, lexicography, systematization, seriality: not only an implacably anti-Romantic attitude to the image, but one attuned to the linguistic as such. ‘The world attacks us directly’, he has said, ‘tears us apart through the experience of the most incredible events, and assembles and reassembles us again. Collage is the most appropriate medium to illustrate this reality’.
– excerpt from Collage: The Making of Modern Art, by Brandon Taylor

Working with computer graphics some of these conceptual approaches might seem more obvious than back in the ancient times of glue, magazine and sharp knives…I know I’m dating myself, but yes, I come from before the internet. I wonder if these works would resonate with a “native”. Any millenials that would care to pipe up, I’d love to hear your perspective.