Is the Art Market About to Crash Again?

The prices being fetched for fine art at auction these days are, to put it frankly, mind-boggling. According to Artprice, a French company that tracks the global art market, the total value of all works sold June 2012 to June 2013 was $1.4 billion USD. To put that in perspective, the 54,000 square foot  Museum of Arts & Design in midtown Manhattan only cost $65 million USD to build.

There is some worry about overvaluation – basically, the concern that buyers are picking up pieces based on their value as a commodity rather than their value as art, creating a market based entirely on perceived value rather than underlying or long-term value. Basically, how trendy an artist is on the auction block as opposed to their relevance to art history. Damien Hirst is an artist people often point out whose work sells for millions at a go but is essentially without any kind of craft. Think of his famous cow & calf preserved in formaldehyde, “Mother and Child Divided”, or his equally well-known spot paintings. 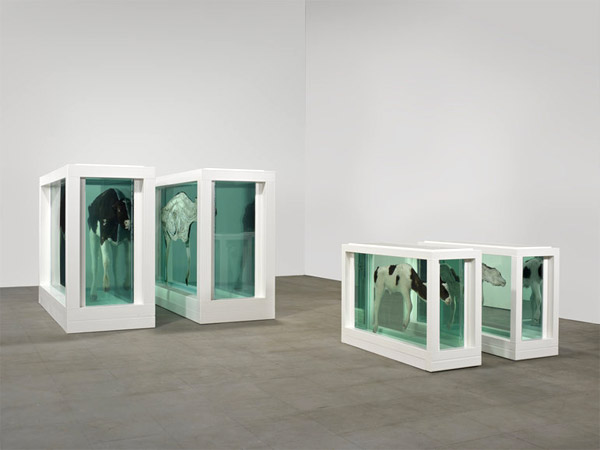 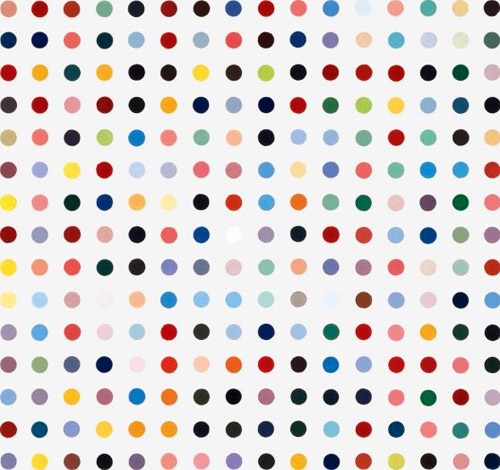 Hirst is quite frank about what he doesn’t do. He doesn’t paint his triumphantly vacuous spot paintings – the best spot paintings by Damien Hirst are those painted by (his assistant) Rachel Howard. His undeniable genius consists in getting people to buy them. Damien Hirst is a brand, because the art form of the 21st century is marketing. To develop so strong a brand on so conspicuously threadbare a rationale is hugely creative – revolutionary even. The whole stupendous gallimaufrey is a Vanitas, a reminder of futility and entropy. (Robert) Hughes still believes that great art can be guaranteed to survive the ravages of time, because of its intrinsic merit. Hirst knows better. The prices his work fetches are verifications of his main point; they are not the point. No one knows better than Hirst that consumers of his work are incapable of getting that point. His dead cow is a lineal descendant of the Golden Calf. Hughes is sensitive enough to pick up the resonance. “One might as well be in Forest Lawn [the famous LA cemetery] contemplating a loved one,” he shouts at Hirst’s calf with the golden hooves – auctioned for £9.2m – but does not realise it is Hirst who has put that idea into his head. Instead he asserts that there is no resonance in Hirst’s work. Bob dear, the Sotheby’s auction was the work.

Historical footnote: This is an excerpt from an op-ed by Germaine Greer on the inability of the art critic Robert Hughes to grasp Damien Hirst’s work. It was written shortly before the collapse of the art market in November of 2008, when prices fetched at auction for fine art dropped by as much as 30%.  While Hirst is seen as a great marketer, as Greer points out,  if the point of art is marketing, it is subject to the market. In the 2008 crash, stock in Sotheby’s dropped to $9 a share from $50 a share the year previous. To some extent this came as a surprise to art dealers, who had maintained that the art market was more or less immune to the vagaries of the stock market. When the cascading effect of the real estate bubble’s collapse crashed the stock market, the art market turned out to be less invulnerable than previously imagined. Word on the street is that Hirst only maintained his auction prices by buying his own work in tandem with a consortium of like-minded art investors driving up the market. While shill bidders are nothing new in the art world, it was a ballsy move equivalent to a gang of confidence men running a long grift. That aside, the recovery of the art market since the crash has surpassed its former glory – in spades. 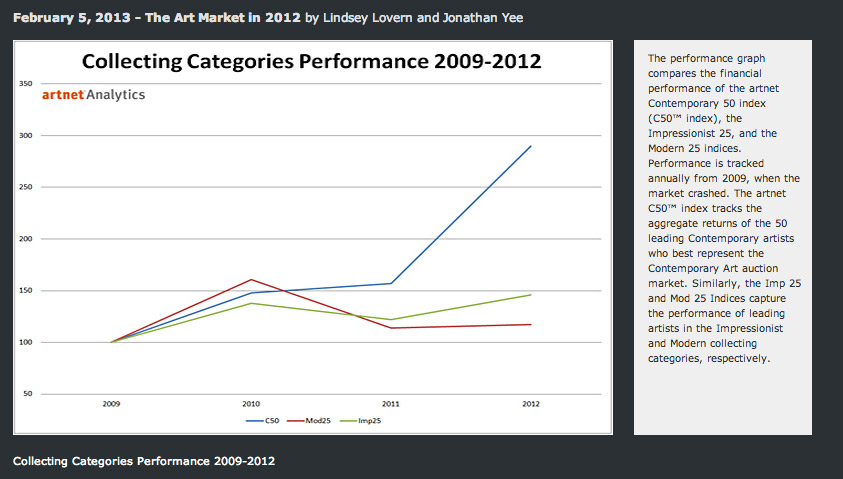 On November 12, 2013, Francis Bacon’s 1969 triptych “Three Studies of Lucien Freud” broke the record for the highest price ever fetched at an art auction, sold by Christie’s for $142.2 million USD. In the same auction, Jeff Koons became the highest-grossing living artist, with one of his sculptures, a monumental stainless steel reproduction of a balloon dog, selling for $58.4 million USD. Gerhard Richter is right behind Koons – in May his 1968 painting “Domplatz, Mailand” sold for 37.1 million USD, in 2012 his painting “Abstraktes Bild” sold for $34 million USD. 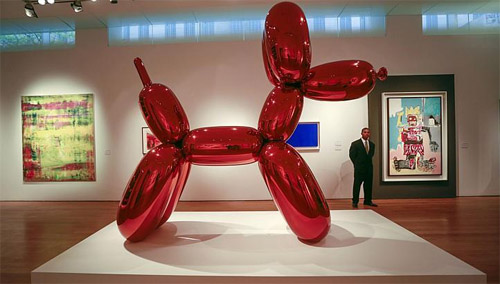 A balloon dog! Made of steel! And really big!  Genius. While Koons has been out-Hirsting Hirst in terms of bringing work to market for decades that has no value other than a sophisticated one-liner “get it?” at the expense of the art market, this takes the cake. It is so obviously and unashamedly a joke that only the most self-involved connoisseur or strictly money-hungry idiot could think this piece is worth $58.4 million USD. The mind boggles, truly.

Of course, these enormous gains in the art market beg the questions, “Why now?” and “How long can this last?”

First, the why now. There have been a lot of people commenting on exactly who is buying art work for these incredible sums, and what their motivation is. Obviously it’s not just that they  like art, but that it’s seen as an investment opportunity. It’s also worth noting that when prices at auction are this high it’s like the Dutch Tulip Craze – it doesn’t matter if it’s a volatile market, only if there’s someone willing to pay more – and with this kind of money changing hands, you’d be a fool not to get in on it, too if you have that kind of dosh to spread around. There’s a bit more to it than that, though – yes, there are hedge fund managers buying trophy pieces, but it’s not just the Wall Street 1% showing off their wealth. For instance, drug cartels are buying art to launder their money. Russian oligarchs are fleeing before Putin confiscates their money, and sinking that money into contemporary western art. Then of course there’s the fact that while historically auction houses have discouraged flipping, they now allow it – which not only drives up prices, attracting speculators, but if you roll your sales into a new purchase you don’t have to pay capital gains taxes on the original sale as it’s been re-invested. It’s not just about money to spend, but money to hide. All in all, it sounds pretty wild west out there.

As far as how long this can last, the short answer is simply that nobody knows, but with prices ramping up this quickly it’s making a lot of analysts nervous.

With so much talk of an art bubble, whether it’s bursting or about to burst, it’s not surprising that higher-priced pieces and wealthier buyers are turning up at auction. Felix Salmon of the Reuters news agency has a nuanced take on why these soaring prices might indicate that the mythical art bubble will burst soon. Salmon highlights what was once rare: Flipping works — formerly frowned upon by galleries and auction houses — is becoming more common. Flipping works can make for a strong season, but it doesn’t necessarily mean these prices will last much longer. As Salmon predicted, there’s another reason for flipping and soaring prices:

“If we see another record-breaking season in New York this week, don’t take that as a bullish sign. It could just be that we’re entering a period of feverish selling.”


Basically, then, what we’re seeing sounds an awful lot like  prices are going to keep spiralling ever upward until somebody flinches at the reality of  the Emperor’s new clothes. With a glut of overvalued paintings on the market, prices will inevitably bottom out –  where they come to rest is anybody’s guess, but at this point the art bubble’s collapse seems to be not so much a question of  if, but when.