La Forêt (1927), Max Ernst. Well, not quite. This forgery by Wolfgang Beltracchi was part of the collection of the Max Ernst Museum in Brühl, Max Ernst’s birthplace. It sold for 7 million euros in 2006. 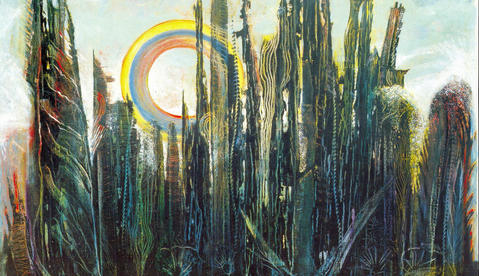 In one of Germany’s greatest art scandals, former hippie and talented artist Wolfgang Beltracchi forged dozens of paintings over a period of 35 years, earning millions and fooling top collectors and museums. Now he’s about to go to jail. In a SPIEGEL interview, he reveals how he did it and why he eventually got caught.

These incredible forgeries of artists such as Dérain, Metzinger, Ernst, van Dongen, and Dufy were not copies of existing works, but “newly discovered” works, or paintings that were documented as “lost” with no known reproduction to refer to. They sold for millions of dollars in auction houses like Sotheby’s and Christie’s, and were on display in many prominent museums around the world – until quite recently.

The Der Spiegel article incorporates not only the Beltracchi interview, but also also discusses the history of art forgery, the context of Beltracchi’s success, and what impact forgeries have on the international art market. It is a fascinating and eye-opening read.

SPIEGEL: Your Campendonk forgeries, for example, led to an explosion in prices for his paintings on the art market.

Beltracchi: Prices tripled. The same thing happened with (Max) Pechstein and Max Ernst. His widow Dorothea Tanning, an artist in her own right, said that one of my forgeries was the most beautiful Max Ernst painting she had ever seen. The trick is to paint a picture that doesn’t exist, and yet that fits perfectly into an artist’s body of work.