The biggest art market news from last week was the sale of a Gerhard Richter painting by Sotheby’s that has broken the record for the amount paid for the work of any living artist. I’m a big fan of Richter, so it pleases me that he has this kind of status in his lifetime, even if the £21 million paid for the piece goes to Eric Clapton – who bought it for a mere £2.1 million. The mind boggles. 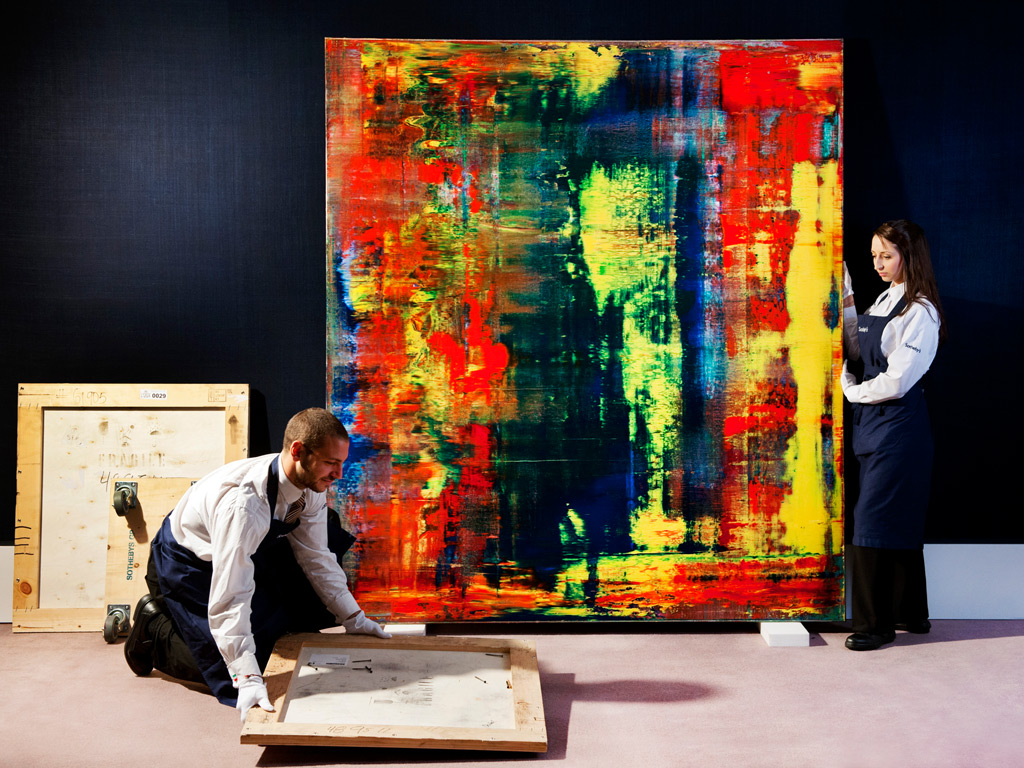 The picture, described as representing “calculated chaos”, sold for double its estimate last week to set a new record at auction for an art work by any living artist.

The previous record for a work by a living artist was set by the sale of Flag by Jasper Johns which sold for £19.5 million at Christie’s in New York in May 2010.

As might be expected form this sort of occurence, there is some backlash. One article goes so far as to ask whether the wrong Richter painting got the acclaim.

Gerhard Richter is possibly the greatest painter of our time, but the giant smear that is ‘Abstract Painting (809-4),’ which set a new ‘living-artist’ auction record at $34.2 million, could be mistaken for splashy décor …
… The issue with Richter may be that the photographic paintings that matter most in his career also can be rough to deal with. His greatest work is called Oct. 18, 1977, and consists of 15 blurred gray-and-black pictures of the Baader Meinhof gang, including paintings of several members after their deaths in jail. Over-the-sofa pictures these aren’t, but they’ve triggered reams of deep thought from some of the best minds around. It is possible, just, to go almost as deep with Richter’s abstractions, if you put in the work. But it’s also very easy to skim their surfaces.

I think Gopnik is a bit harsh, as I do see the point of Richter’s exploration of abstraction – after mastering representational realism, Richter experimented with a number of techniques that recall photography and question this kind of painting in the age of mechanical reproduction and photography.  Richter would paint a representational realist piece and go at it with a squeegee. Going a step further and removing not only brushstroke but representational content is fairly obvious logical step. Richter’s paintings are just as much about the act of painting itself & the painter’s role within contemporary art as they are about any subject, and whether a piece like Abstraktes Bild (809-4) appeals to you or not is really a matter of personal taste.  It is, however, an entirely valid point that Richter’s truly amazing earlier work like the Oct.18, 1977 series would never fetch these kinds of prices by collectors simply because the work is far more challenging – at least in terms of its figurative content.