Checking up on one of my favourite art blogs, Lines and Colors, I became acquainted with the work of Dina Brodsky. Intrigued, I started reading up on Brodsky and her work.

Born in 1981 in Minsk, Belarus, Brodsky moved to the United States with her family in 1991.

Dina Brodsky did not set out to be a painter. She graduated from high school and started college just before she turned 18, which gave her some time to kill. So she enrolled in a painting class.

“I didn’t know what I was doing with myself ,” Brodsky said in an interview with Fusion. “I thought painting would be an interesting thing to do until I turned 18, dropped out, and hitchhiked around Europe. That was my plan.”

Picking up a paintbrush for the first time was a transcendent experience for her — one that lead to what she calls her “improbable career” as a professional miniaturist.

So yeah, happy accidents. From her start at the Amsterdam Academy of the Arts, Brodsky went on to earn a BFA from University of Massachussetts (2004) and an MFA from the New York Academy of Art (2006) and has exhibited in at least one show every year since graduating.

There’s something very intriguing about miniature painting, especially within the context of representational realism. There’s the charm of the small, with its spatial intimacy. You can’t stand back and let a miniature painting wash over you. There is no monumental domination of your field of vision, only you, very close to a small work that is rendered in high detail. You have to get right in there with the art, examining the details. It occupies the same space as you do. But this is where it gets interesting: you are the only person. There are traces of people, and implied narrative, like the repeated appearance of the red, sleeveless summer dress. Sometimes there are birds, or small animals. Whether the birds & animals are meant symbolically or as a simple incursion of nature into previously occupied spaces is unexplained. 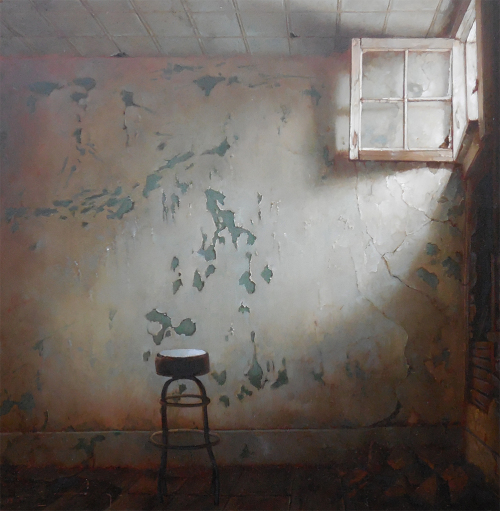 The physicality of the art is also intriguing, for a few reasons – first, many of them are round, which suggests the round windows that are often cut into the hoardings of a construction site where you can only really glimpse the work on the other side from a very specific angle, especially because they are unframed. By extension, the similarly unframed square paintings also become fixed windows; not the kind with casements and curtains, but a temporary peephole into another place. Of course this impression is also nudged along by Brodsky’s titles, like demolition Spyhole (a recurring series). 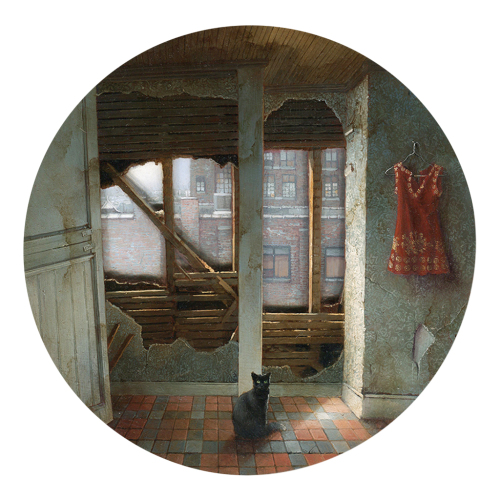 The second thing that is intriguing about the paintings in a physical sense is the media used – mostly oils on different plastics like Plexiglas or drafting mylar. Presumably this is so that the grain of canvas doesn’t interfere with the fine detail of the renderings, but paint behaves differently on plastic than it does on even slightly absorbent material. 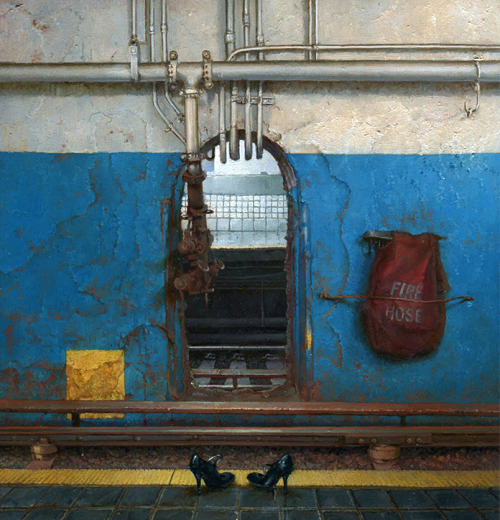 It’s also interesting in that it is a non-traditional medium, at least for fine art – painting on plastic is more typical of animation cels. Not that there’s anything cartoonish about Brodsky’s work. I see it more as a kind of contemporary contextualization, reminding us that while we are looking at miniature painting, these are not the precious jewels of the Renaissance. 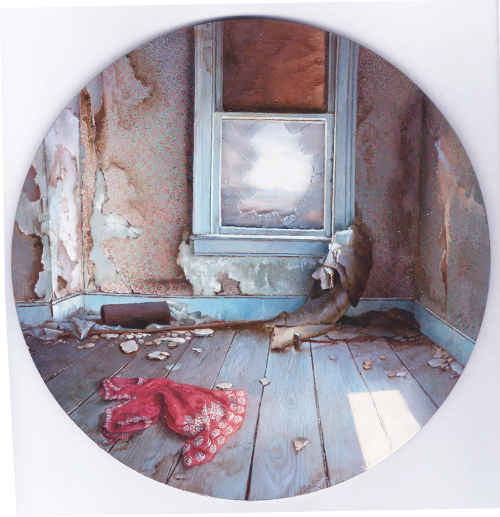 The show runs until January 11, 2015 so if you happen to be looking for something to do in or near Hallandale, Florida over the next couple of months, Sirona Fine Art is at 600 Silks Run #1240, The Village at Gulfstream Park, Hallandale Beach, Florida.

If you would like to see more of Brodsky’s work, you can check out her personal portfolio website, http://dinabrodsky.com/ or if you are down with the Book of Faces she has a page there,too –https://www.facebook.com/dina.brodsky.7.

All images used in this post are used with permission, courtesy of the artist.