Coney Island at the Wadsworth Atheneum

The Wadsworth Atheneum is one of the oldest public art museums in the United States. Okay, they say the oldest but Wikipedia disagrees. I’m not here to fight it out, but rather to praise. The Wadsworth Atheneum has an impressive collection, it was the first in America to acquire pieces by Salvador Dalí, Balthus, & Piet Mondrian, and hosted the first American exhibition of surrealism in 1931. They also happen to have my personal favourite painting, Max Ernst’s masterpiece, “Europe After the Rain II”.

Early in 2015, a new exhibition will be on display in the newly expanded and renovated exhibition hall of the Wadsworth Atheneum, “Coney Island: Visions of an American Dreamland, 1861-2008”. 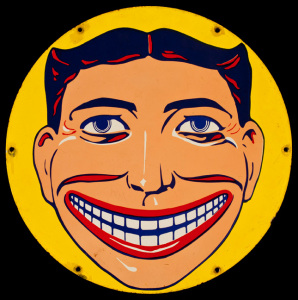 It’s  based on a pretty interesting idea, which is using art to look at 150 years of Coney Island’s history from undeveloped beachfront to its present incarnation, and all the stages inbetween.

The modern American mass-culture industry was born at Coney Island, and the constant novelty of the resort made it a seductively liberating subject for artists. What these artists saw from 1861 to 2008 at Coney Island and how they chose to portray it varied widely in style and mood over time, mirroring the aspirations and disappointments of the era and of the country. Taken together, these tableaux of wonder and menace, hope and despair, dreams and nightmares, become metaphors for the collective soul of a nation.
– from the exhibition’s website

Coney Island has a pretty fascinating history. Originally an undeveloped beachfront, it was a popular resort destination around the end of the American Civil War, with 3 elegant hotels by the early 1800s. By 1897 the amusement parks had already begun to spring up. By the time of the famous Dreamland fire in 1911, Steeplechase Park and Luna Park were well-ensconced. Coney Island became wildly popular with working-class New Yorkers looking for a way to beat the summer heat as the movement in the 1880s to have a “half-holiday” on Saturdays (until then, people worked 6 days a week) coincided with the expansion of excursion railroads and the Brooklyn street car line. At the time, there were few places for working class people to socialize, particularly women. Even before the subway line was expanded in 1915, Coney Island’s star was at its peak; when Dreamland, Steeplechase Park, and Luna Park were all open upwards of 100,000 people a day would visit.

Coney was at its peak during the years that the three major amusement parks dominated the scene.  It was the major tourist destination in America. Crowds routinely topped 100,000.  In contrast, Disney World has never reached this figure.
– the Ultimate History Project: “America’s Playground”, John Parascandola

After WWII, Coney Island became less popular for a variety of reasons, including the invention of home air conditioning. By the 50s it was notorious for gang problems and prostitution. Skip ahead a few years and Hurricane Sandy messed things up, but it’s been repaired, spiffed back up, and still going strong.

“Coney Island” will feature more than 140 objects, comprised of both celebrated icons of American art and rarely-shown works from both public and private collections, including paintings, drawings, photographs, prints, posters, architectural artifacts and carousel animals. Ephemera, sound recordings and film clips will immerse visitors in the popular culture of Coney Island.
– from the exhibition’s press release

One of the great things about me writing about this show 3 months in advance is that it gives you, dear reader,  plenty of time to make travel plans. The Wadsworth Atheneum is located at 600 Main Street in Hartford, Connecticut,  and the show runs from January 31 to May 31, 2015.