I went on a 4-day road trip to Philadelphia last week, and amongst other things, saw a lot of really good art.

Of course I went to the Philadelphia Museum of Art, my main motivation being that they have an excellent collection of work by Marcel Duchamp, knowing pretty much zilch about the collection other than that. They did have lots of Duchamp, and much more.

One interesting thing about the Philadelphia Museum of Art is that there are copyists in the galleries. I would guess offhand that it must be in affiliation with one of the many local art schools. Here’s one at work copying Sir Lawrence Alma-Tadema’s painting, A Reading from Homer. That’s a pretty old-school (literally) approach to learning to paint, and I’m pleased to see that the kids are still down with that. 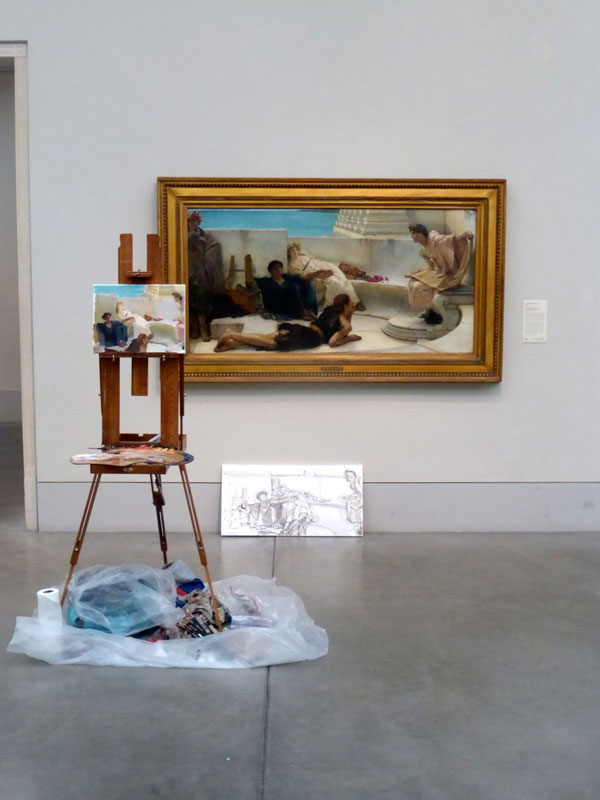 One of the things I like best about going to art museums is that you not only get to see work that you have only seen in reproduction, but you also get to really get up close. Take Chuck Close (no pun intended), for example. I really enjoy his work and have seen a bunch of his early photorealist work in real life, and it is impressive in magnitude and execution. His more recent work is a more complex tiling-based approach where each tile contains swirls and loops of a range of colours that, at a distance, cohere into a clear portrait. Take this portrait of Paul Cadmus from the Philadelphia Museum of art as an example: 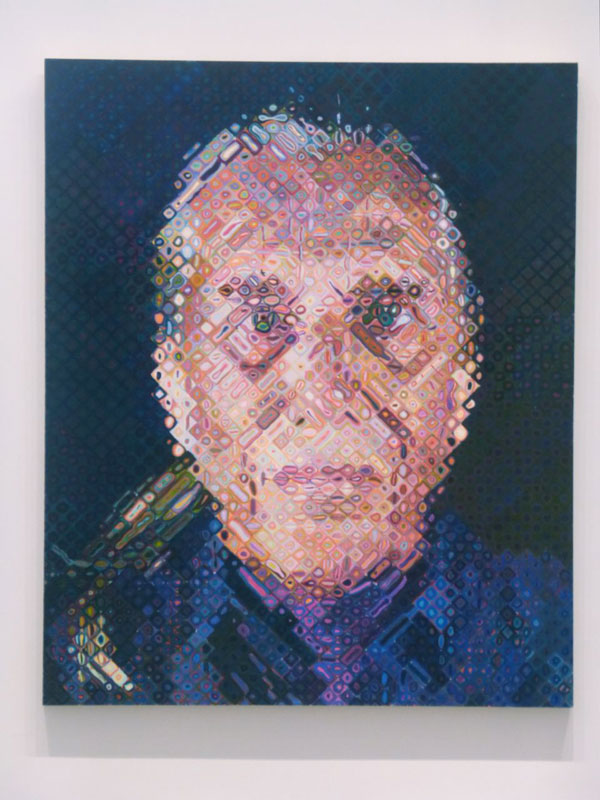 Pretty cool, right? The thing you never notice in reproduction though is that those tiles are actually really painterly and loose. The brushstrokes are very unrestrained and while the repetition of the tiles themselves is very orderly, the grid lends a rhythmic quality to the freedom of the marks, like the visual equivalent of listening to music. It’s also all the more remarkable to see how much variation in colour really is going on there. 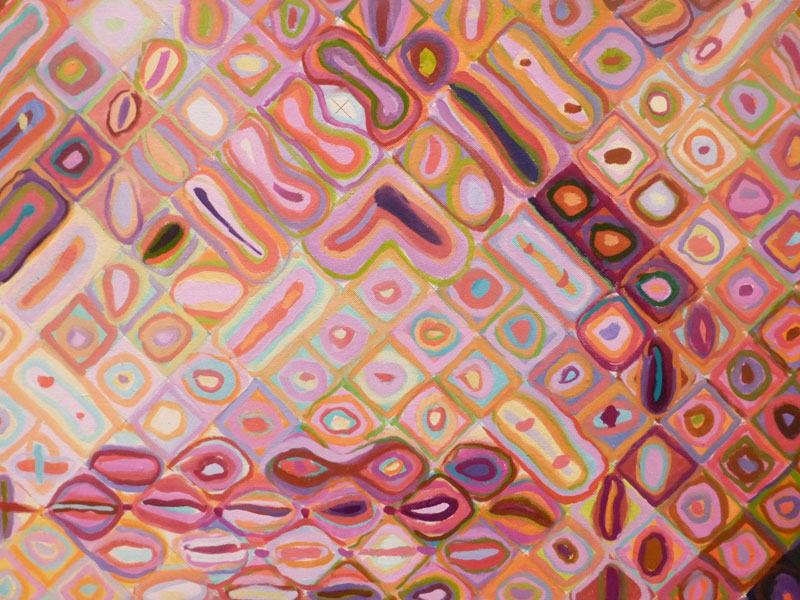 Another fun artist to do this with is James Rosenquist. 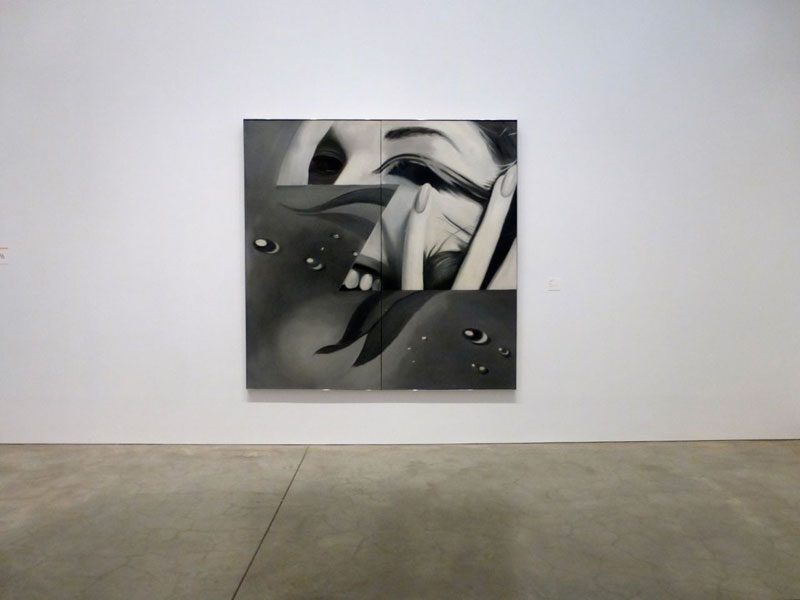 One of the interesting things about Rosenquist is that he started out as a billboard sign painter, back in the time when billboards were painted, and you can really see how the apparently finely detailed figurative realism in his work is actually quite loose when you get up close to it. 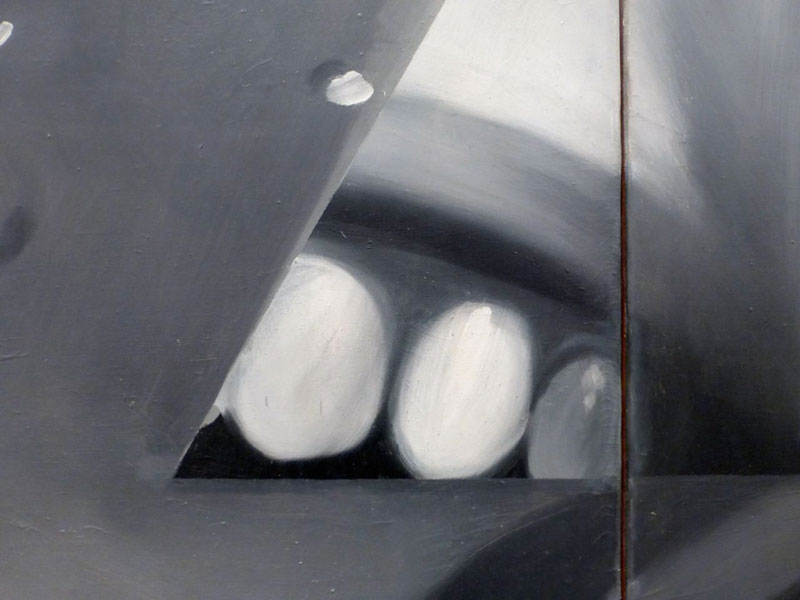 When you see details sometimes the work just makes more sense. For instance, Alice Neel – I’ve seen this painting in reproduction a gazillion times and it just does nothing for me. In real life, I saw how it’s this great combination of painterly and graphic approaches, though, and fell in love. I mean really, just look at that knee. Now that’s painting! 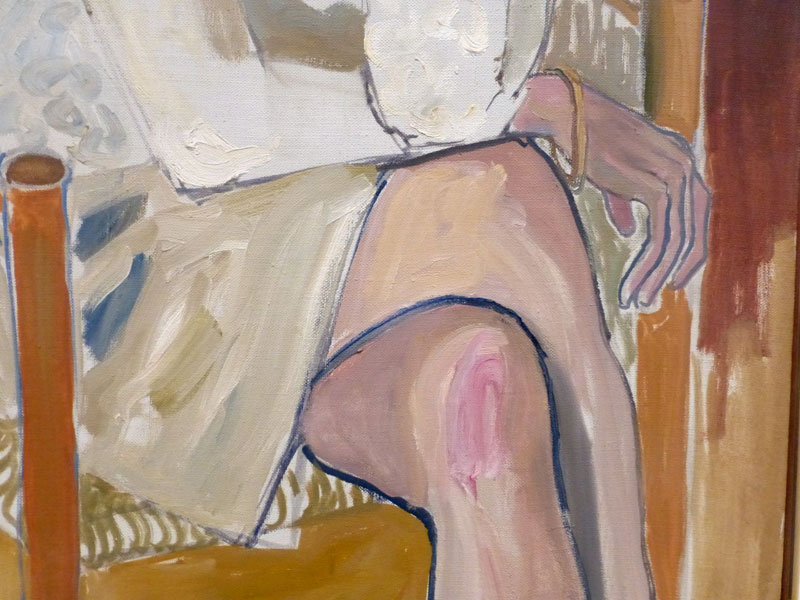 Then there are some paintings that go beyond mere craft and transcend form entirely. Take, for example, this painting by Henri de Toulouse-Lautrec. Think of the lives he must have crossed paths with in late 19th century Paris, the countless faces shambling through the pains and triumphs of their lives, working, loving, living – all lost to the ages, because Toulouse-Lautrec decided to paint this stupid little dog instead. I love this painting. It’s so kitsch it’s a transgressive act of genius. 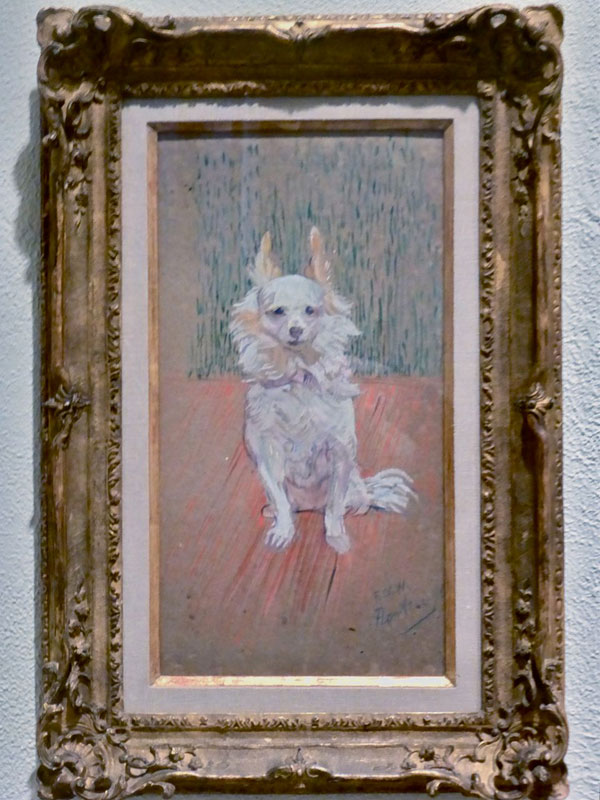 The Philadelphia Museum of Art actually does have a remarkably good collection on display taking into consideration that it’s not a huge space. Well, it is actually a very big building, but there’s not a lot of gallery space given the physical footprint of the building. It’s really quite massive, but very airy, a bit more reminiscent of a train station than an art museum. With the limited amount of wall space, the work on display is all wheat, no chaff. They have a few very good Monet paintings, for example, that I had no idea were in Philadelphia – including my very favourite Monet of all time. 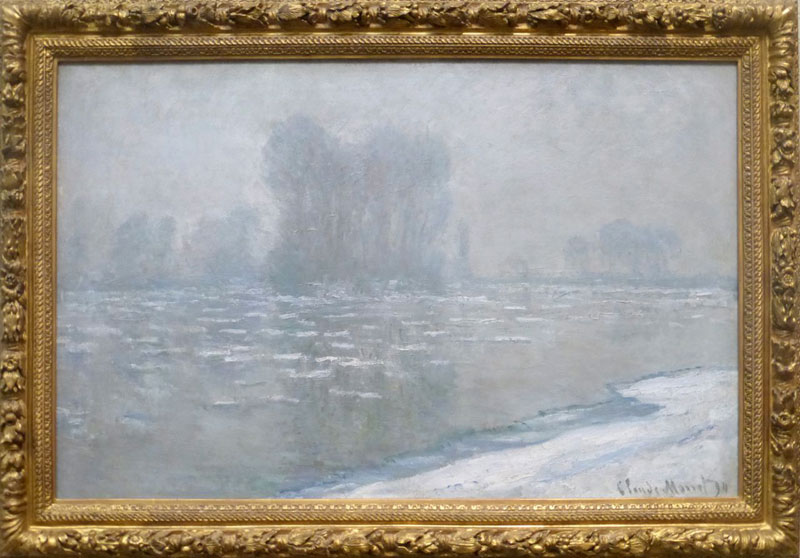 People go on about Monet’s haystacks, his Poplar Series, and his paintings of his garden, but for me, this painting of a winter scene is a masterwork that shows off everything Monet knows about form and colour. Maybe it’s because I’m Canadian, but the subtlety required of a snow scene is to me the finest proof of painterly skill. I mean, really – viridian green? Cobalt blue? This is off the hook. 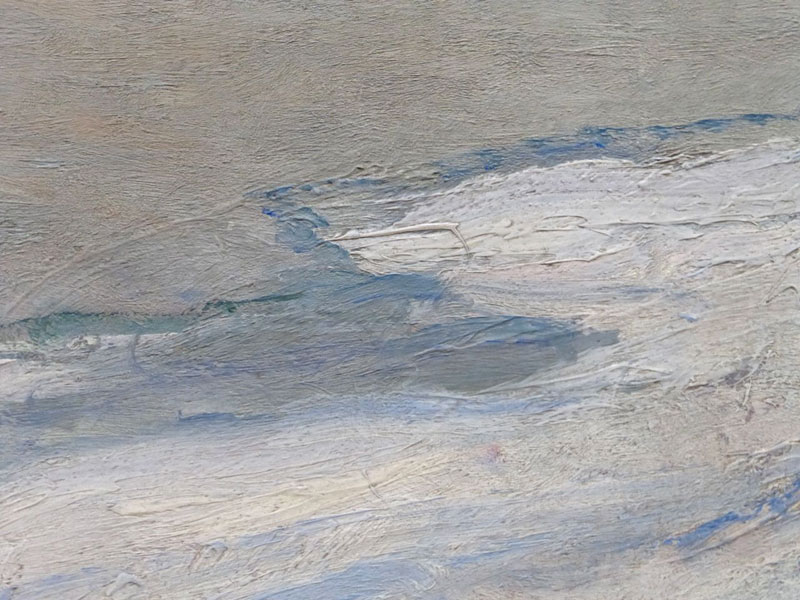 I know, right? Of course you want to see another detail, I completely understand. That’s alizarin crimson in there! 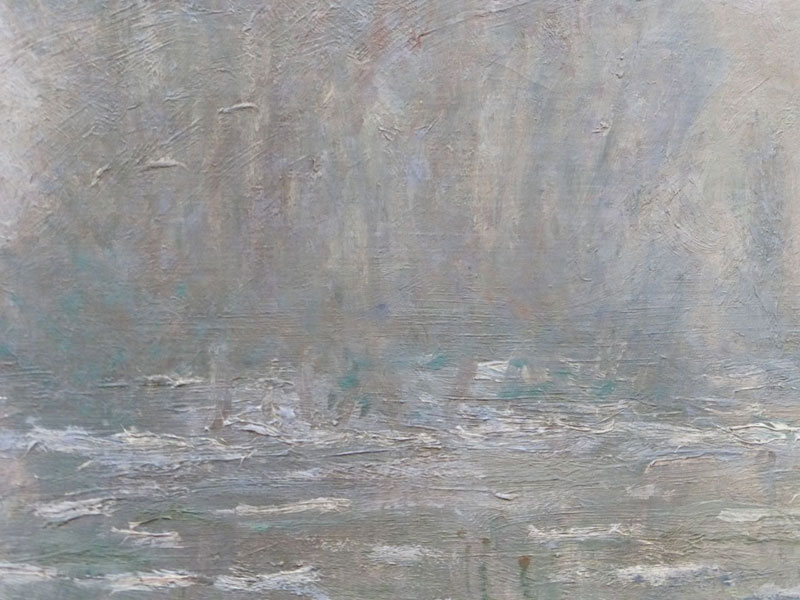 The special exhibit is currently a really good collection of Korean art, Treasures From Korea – no photography was allowed inside the exhibit so you’ll have to be satisfied with this shot I took of the display poster. It’s a detail of the larger piece that I found really compelling as it shows off a lot of the decorative motifs common to Korean (and Japanese and Chinese) textiles with a more naturalistic approach. I had no idea the scalloped patterns represent rocks, for instance. In this shot I juxtaposed it against the rigid architecture because that’s how I roll. 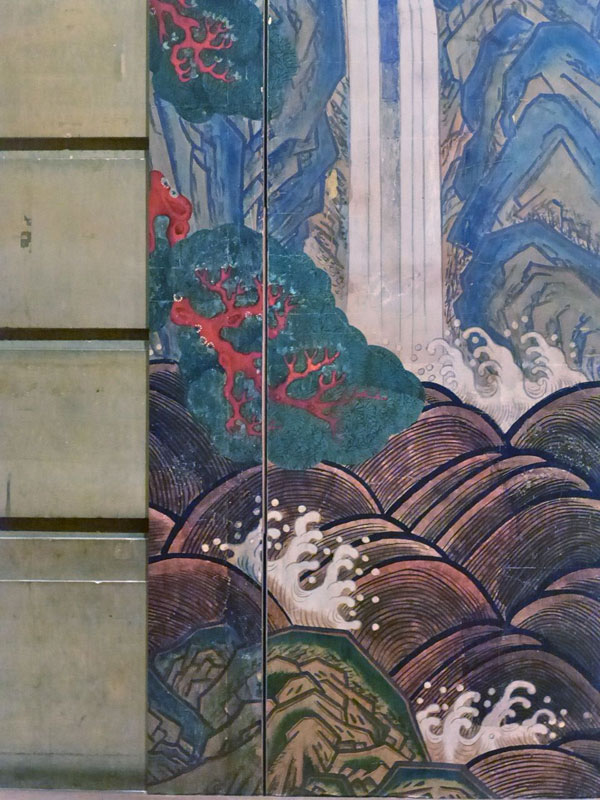 There was lots to see, but of course there was the Duchamp. I have written about Duchamp at length so I won’t bore you with repetition, but suffice to say that the Big Glass  is far more impressive in real life than in reproduction, which should come as no surprise. One of the things I like best about the room Duchamp’s work is displayed in is that it is very light, and the play of light really brings out the Big Glass in a way I did not expect. 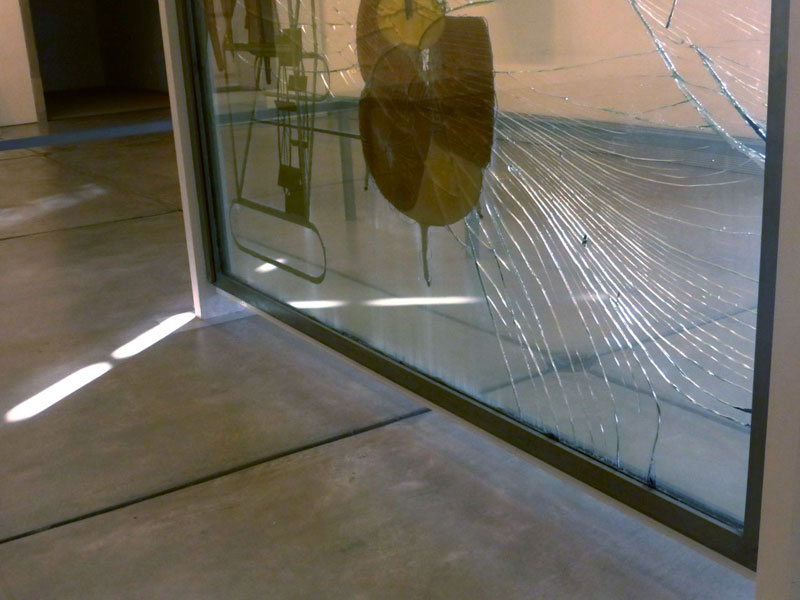 Marcel Duchamp – “the Bride Stripped Bare by Her Bachelors, Even” (the Big Glass) – Philadelphia Museum of Art – detail

After a few hours in the Philadelphia Museum of Art, I made my way over to the Rodin Museum, a couple of blocks away. It is not a vey big collection, but it is the best outside of Paris. Housed in a custom-built edifice that bears an eerie resemblance to the mausoleum in Arnold Böcklin’s painting, the Isle of the Dead. It’s pretty nifty in that you get to see a wide variety of Rodin’s work, from sketchy studies in plaster to fully realized bronzes, as well as a variety of his works in marble. Of course they have “the Kiss” in marble, “the Burghers of Calais” in bronze, etc. It’s pretty remarkable that Rodin’s artistic vision could be fluently expressed through both additive and subtractive approaches. Modelling and carving require very different artistic strengths, and Rodin was a master at both. Right at the front door is the impressive Gates of Hell, a mass of writhing forms depicting Dante’s “Inferno”. Here’s a detail. 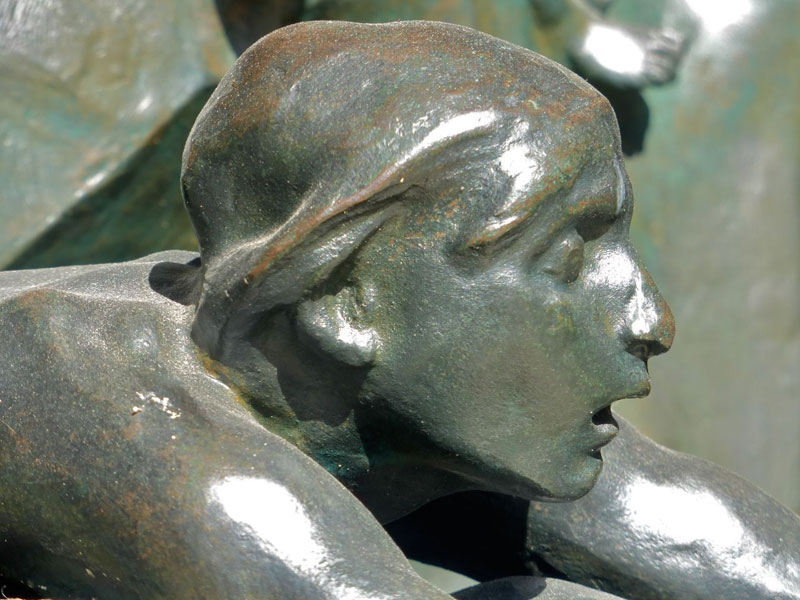 Inside, there are a few galleries radiating off of a central gallery that shows a variety of finished pieces including lots of studies of hands. Boy, could Rodin ever do hands. 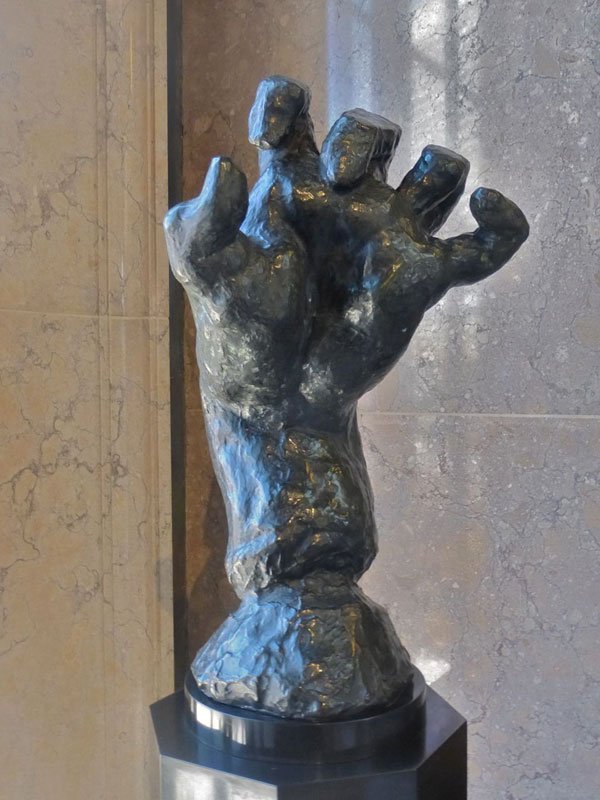 One of the pieces I liked best was a small, rough piece called “the Sorceress”. Mike Mignola is an artist best known for the Hellboy comics, and I’m a fan of his work. This particular Rodin sculpture reminds me a lot of Mignola’s Baba Yaga. I wonder if Mignola is a Rodin fan. If not, he should be. 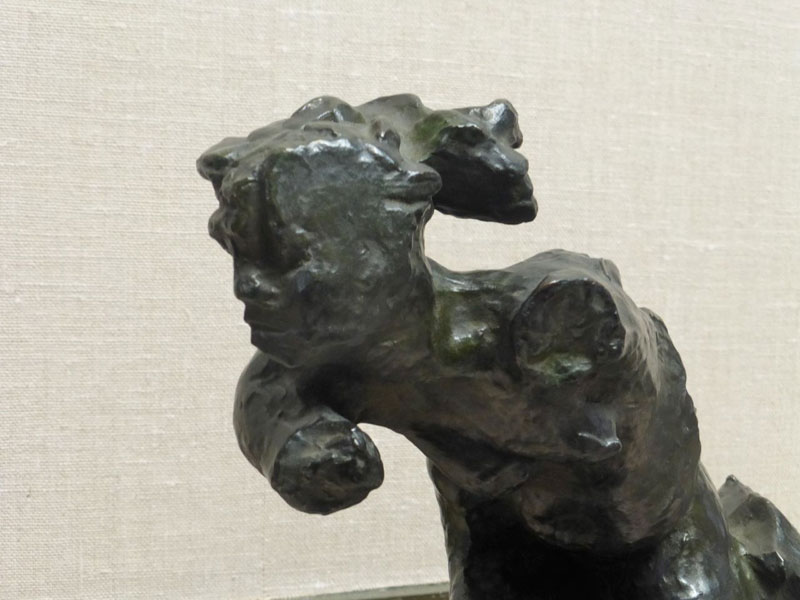 In any case, the shots that I have posted here represent only a very small portion of what you can expect to see at the Philadelphia Museum of Art and the Rodin Museum. There’s lots more art to see in Philadelphia, besides these two museums, too. The Barnes Foundation, for example, is supposedly awesome but unfortunately it requires advance reservations to get in, which I did not know (and isn’t explicitly mentioned on their website) so be forewarned. That aside, there really is a lot to see and do. If you should happen to be anywhere near Philadelphia or are considering a road trip that includes a healthy dose of art, I strongly recommend the City of Brotherly Love.