Cassius Marcellus Coolidge has such a great name that you might imagine he’s a character from a Quentin Tarantino film (theme music: “Fist City” by Loretta Lynn) but you would be wrong. C.M. Coolidge, also known as “Cash” or occasionally “Kash” is the painter of that famous piece, “A Friend In Need”, a.k.a. “Dogs Playing Poker”. 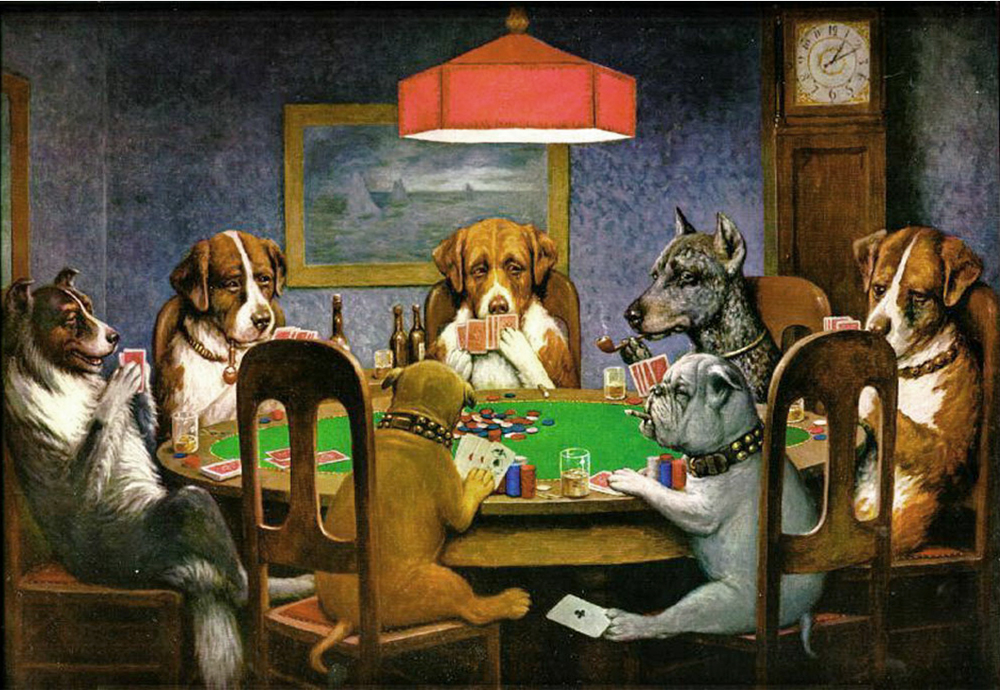 In 1903, Coolidge contracted with the advertising firm of Brown & Bigelow of St. Paul, Minnesota, to create sixteen oil paintings over several years, featuring anthropomorphized dogs engaging in various human activities. Nine of them depict dogs playing poker, a meme Coolidge is credited with inventing, and which inspired 1950s American illustrator Arthur Sarnoff who is also famous for paintings of dogs playing pool, poker and craps, along with various other later imitators. On February 15, 2005, two of these much-imitated paintings, A Bold Bluff and Waterloo, went on the auction block expecting to fetch between $30,000 and $50,000 but surprisingly sold for $590,400 at Doyle New York. The auction set an auction record for Coolidge, whose previous top (posthumous) sale was $74,000.
– Wikipedia

Yes, half a million for dogs playing poker. Coolidge is also credited with inventing the standby of fairs, carnivals & theme parks where a comic scene has the characters’ heads cut out so people can stick their own heads through and have their photo taken (known as “Comic Foregrounds” at the time), as well as the “dogs playing pool” meme. How’s that for cultural impact? Not bad for a guy whose name remains relatively lost to the mists of time.

One thing I personally find interesting about “A Friend In Need” is the fairly delicate play of colour. The dappled treatment of the mauve walls alone show a mastery of light and colour that escapes many artists whose work is taken much more seriously. The impressionistic seascape with sailboats is also pretty remarkable – remember that in 1910 that kind of work was still considered pretty avant-garde. Tucking an artistically edgy detail like that into one of the kitschiest of all kitsch paintings borders on Dadaism – if Picabia or Duchamp had made this painting, it would probably be hailed as a masterpiece. Food for thought.