Humour in the Work of Marcel Duchamp

Marcel Duchamp is probably best known as the artist behind “Fountain”, a urinal signed “R. Mutt” in 1917. It is probably also one of his most misunderstood pieces. 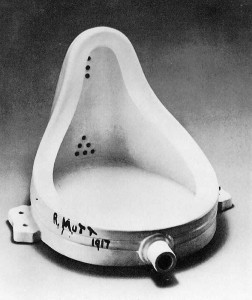 For context, Duchamp was already a known artist, having created controversy with “Nude Descending a Staircase no. 2” which was displayed in the cubist Salon des Indépendants in 1912 but withdrawn when he was asked to cover the title, then later exhibited in the NYC Armory Show of 1913 which first introduced modernism to America.

The Society of Independent Artists, based on the French  Société des Artistes Indépendants, held an annual show “without juries or prizes” that anyone paying the $6 membership could exhibit in. Duchamp secretly  submitted “Fountain” in 1917, when he was acting Director of the Society. When they refused to exhibit the piece, he pointed out that the exhibition was not truly open and resigned. While “Fountain” is often taken as a dig at the pretensions of modern art, it is actually a dig at the pretensions of modern artists – a subtle yet important distinction.

Perhaps more amusingly, as the original was discarded, an edition of 8 reproductions was later made from glazed earthenware with the original signature printed on it. In effect, this piece is neither a “found object” (or readymade, as Duchamp called this area of his ouevre), nor even an authentic object. The replicas now on display in museums are an artist’s in-joke folded in upon another artist’s in-joke, which makes it all seem the more conceptually complex. Duchamp was a pretty complex guy.

Duchamp had already been working with the concept of “readymades”, most of which were also thrown out by accident, and exist entirely in reproduction such as the 1915 piece “In Advance of a Broken Arm”, an unmodified snow shovel which was thrown out (MOMA has a reproduction from 1964 on display) or “Bicycle Wheel” (1913, reproduced 1951 for MOMA). Artisanal reproductions of stuff that Duchamp decided ought to be art, because well, he was an artist and that’s that.

The conceptual playfulness of Duchamp is often overlooked, but  the tongue-in-cheek quality of his choices and the ambiguity they evoke is everpresent. That most of the readymades on display are artisanal custom reproductions is the product of an exquisitely dry wit.

Duchamp created these “readymades” in answer to what he called “retinal art”, art that is simply a question of the artist’s tastes. He explained that by removing personal taste from the act of artistic creation, he could perform an artistic act of selection, elevating an everyday object to the status of art. To prevent the interference of personal taste, he limited his production of these pieces.  Of course, in so doing, Duchamp took minimalism to its most extreme conclusion, and invented conceptual art. In essence, Duchamp’s readymades were a bold assertion that to be an artist you didn’t have to actually make anything. Again, a dig at artists & the art world, since his work was being displayed alongside pieces of art that some poor schmoe had laboured over for who knows how long… effectively, Duchamp’s readymades beg the question – why bother? You can simply display something you bought at a flea market and people will take that as art, too. In taking modernism down a very conceptual rabbithole, he turned the art world on its ear and forced artists, dealers, and patrons alike to ask themselves some very uncomfortable questions about why art matters in general. That he continued to make art in the meantime makes the satirical nature of his work all the more obvious. 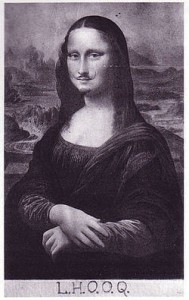 Taking readymades a step further (and also displaying his irreverent sense of humour), Duchamp created “L.H.O.O.Q.” in 1919, apocryphally in response to an invitation by André Breton to officially join the Surrealist movement.

Art historians made a lot of hay out of the depth and complexity of this piece – but the obvious humour of drawing a moustache and goatee on a cheap reproduction of the Mona Lisa, inscribing it with a dirty joke in the form of an acronym, and sending it as a postcard to decline a significant invitation is lost on only the most obtuse of academic minds – of which, apparently, there are many.

Duchamp moved on from readymades into a variety of different approaches to creating art. One of his masterpieces is “The Bride Stripped Bare by her Bachelors, Even” (1915-1923), also known as “the Large Glass”.

It is an incredibly detailed act of formalist symbolism. Duchamp included an explanatory guide that makes analysis of the piece like some kind of Rube Goldberg machine in the form of art.

Duchamp’s art does not lend itself to simple interpretations, and The Large Glass is no exception; the notes and diagrams he produced in association with the project complicate the piece. For example, he describes elements that were not included in the final version as though they were there, and “explaining” the whole assembly in stream-of-consciousness prose thick with word play and jokes. Dubbed The Green Box, this ‘guidebook’ has been described as “No less ambiguously or freely interpretable than the [The Large Glass] itself…”
– Wikipedia 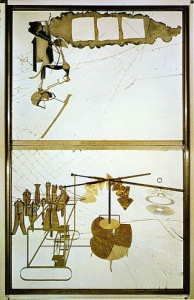 You have to enjoy the concept of a guidebook that is at least equally as opaque as the work of art is describes. To give an idea of how much time and consideration Duchamp put into this, the cones in the lower panel are actually dust which was affixed to the glass  as it accumulated year over year with glue. Again, apocryphally, the cracks in the glass were caused by workmen moving this incredibly large, delicate piece of work – that Duchamp had worked on for 8 years. His response to seeing that the panel was broken was, “At last, it is completed”.

Eventually, Duchamp gave up creating art to play chess. Although he was involved with the art world to some extent, he achieved the rank of chess master in 1925, co-authored a book on very advanced chess theory and worked for a while writing a newspaper chess column.

Secretly, however, he had been working all this time on a major piece that his will stipulated was only to be exhibited after his death – “Etant donnés: 1° la chute d’eau / 2° le gaz d’éclairage“. He had worked on this piece in his Greenwich Village studio from 1946 to 1966, in a period when even his closest friends though that he had abandoned art. Now THAT is a complicated sense of humour.

It is important to keep in mind that Duchamp was very serious about art; his motivation was not cynicism. To ignore his sense of humour and intellectual playfulness, however, is to ignore an essential aspect of his work.

As might be expected, there are so many books about Marcel Duchamp’s work and life that you could easily build a library devoted solely to this topic (and in fact some have). If you are looking to learn more about Duchamp’s life, Duchamp: A Biography

by Calvin Tomkins is highly respected. If you are more inclined toward reading about Duchamp’s work, you would be hard pressed to do better than The Complete Work of MARCEL DUCHAMP. Second revised edition.