He has his own studio in Milan, where he works as a freelance graphic designer and calligrapher. Letters are the main ingredient of his creations. He teaches calligraphy with the Associazione Calligrafica Italiana and holds workshops in several European cities. The means of his work is to make the manual skill of an ancient art as writing and the languages and instruments of the digital era coexist.
– Luca Barcellona

I first came across Barcellona’s work through his work for the streetwear brand, Carhartt. Having worked with sport and streetwear garment brands myself, I know the multi-brand approach well – many labels use dozens of different logo treatments in any given category and season. Barcellona’s creativity and skill is really showcased in the range and fantastic execution of this series. 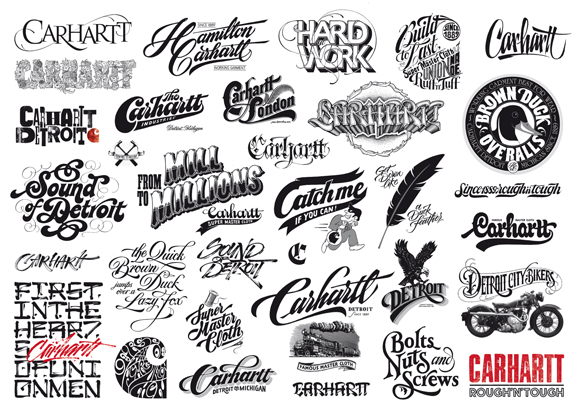 When I was very young, mother made me play this game in the car so that I could recognise and read the store signs. I was really fascinated by the letters. So big, so many colours, and each sign so different.   … Letters are the codes we use to communicate. A phoneme becomes a graphic sign, and the letter designer’s job is to give those signs form, or to use the right one. As far as appearances go, it might seem like a minor discipline that most people ignore, but everyone benefits from it somehow or another. In a society founded on the image and on communication, letters are fundamental.

Barcellona is a real master calligrapher, which in many ways seems like something of a lost art – it’s refreshing to see hand-made type coming back in style but a real calligrapher with an understanding of branding is a real rarity these days. Check out this video of his work in a more “commercial” style…

…and now check out his work doing traditional calligraphy. Breathtaking.

Luca Barcellona’s website is lucabarcellona.com – that the white text on a vivid red background is nearly illegible seems a bit counter-intuitive, but it’s a great starting point to seeing more of his work.